UNITED STATES−On Monday, March 23, Congress was not able to agree upon the Stimulus Bill for $1.8 trillion to combat the effects of the Coronavirus COVID-19 pandemic. The final vote ending with one Democrat, Alabama senator, Doug Jones, voting in favor of the bill, 49 to 46. Majority Leader Mitch McConnell needed a total of 60 votes for the bill to pass.

The Stimulus Bill was blocked Sunday by Democrats who said the package did not do enough to protect American workers. President Trump promised the stimulus package would help financially support  citizens that may be taken out of the workforce due to shut-downs and quarantines taking place to stop the spread of the coronavirus, while assisting small businesses. He did not sign the initial stimulus package because Speaker of the House Nancy Pelosi included funding for abortion in the verbiage.

Following the first attempt, a new Stimulus Bill was written, and voted against by every  Democrat. Senate Majority Leader, Mitch McConnell stated:

“I want everybody to fully understand if we aren’t able to act tomorrow, it will because of our colleagues on the other side continuing to dither when the country expects us to come together and address this problem.”

Republicans and Democrats worked together on Sunday to create a bill that all could agree on to support businesses, hospitals, nursing homes, and the working class threatened by the effects of COVID-19. 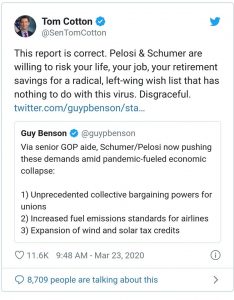 According to reports, on Monday, March 23, Pelosi flew in from San Francisco regarding the new bill which included funding for a free cell phone, which was offered  to welfare recipients during President Barack Obama’s administration.

Several Democrats in the House of Representatives wanted to include extensions of windmill and solar tax credits in the new Stimulus Bill. Some suggested on social media that the Democrats were trying to include funding for The New Green Deal.

“Democrats’ behavior is a national disgrace. They are blocking aid for sick people and unemployed workers over Pelosi’s demands: Limits on ICE and Border Patrol; Regulations from Green New Deal; Disclosures for “corporate board diversity.” 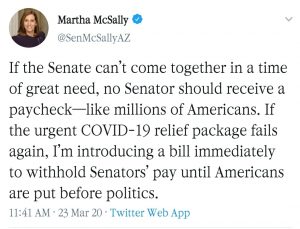