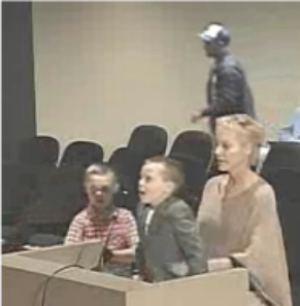 MALIBU—One of the contestants of CBS’s “Survivor: Redemption Island” and her family are among a number of Malibu skateboard enthusiasts who support the city building a skateboard park at Bluffs Park in order to replace Papa Jack’s Skate Park, which was closed down in 2011.

“I wanted to stand and support the skate park as well for my children, and for my husband. There’s so many families that I know would use it that are in support of the skate park,” Kristina Kell told the council in anticipation of its January 23 meeting at which the governing body will decide whether to spend $40,000 to hire a park designer.

An alternative option that the council will consider is moving forward with a conceptual design priced at $7,000.

Justin Kell, her husband, said, “I personally travel hundreds of miles over the weekend, spend money and takes these kids places when I can stay in my own backyard. I just think it’d be a really great opportunity we can give our children, as well as the residents, to stay at home and enjoy this beautiful place we have.”

Hank and Norton Kell, their children, said during the public comment portion of the meeting that they travel long distances with their father to ride their boards at other skate parks or have to skate along the street, but fear getting hit by vehicles.

Kristina Kell, who is a member of the Malibu Skate Park Committee, said she has reached out to local groups such as the Malibu AYSO to get their feedback and make sure everyone is happy with a park they would all eventually share. Seth Jacobson said the little league baseball community he has been involved with as a coach and board member is supportive of the skate park project and welcomes the opportunity to talk about co-using Bluff Parks.

The committee has deemed the parking lot in the southwest portion of Bluffs Park as the most feasible location for the skateboard park. Because parking there is an ongoing issue, especially during the baseball and soccer seasons, city staff is negotiating with the adjacent land’s owner to buy the property to use as parking.

Community feedback then would focus on whether the skateboard park would be exclusively for skateboarders to use or also allow BMX riders and rollerbladers. What is known is that the community wants environmental impacts and noise reduction to be a priority during the planning phase.

“We hope to have a Bluff’s location that will work for all community members who might be effected,” states a website dedicated to the project. “Our intention is to refrain from disturbing any property owners, sports groups or other community members who may either use Bluffs or reside in close proximity to the Park.”

Malibu has been without a skateboard park since late 2011, when the city’s lease expired for the land on which Papa Jack’s Skate Park stood. Steve Soboroff, the owner, did not want to renew the lease because the skate park was located in a commercial area on which he instead wanted to develop a Whole Foods store and four food service buildings.

Soboroff offered to donate $25,000 toward its relocation. The plan is to use such private donations and City of Malibu funds to pay for the park.