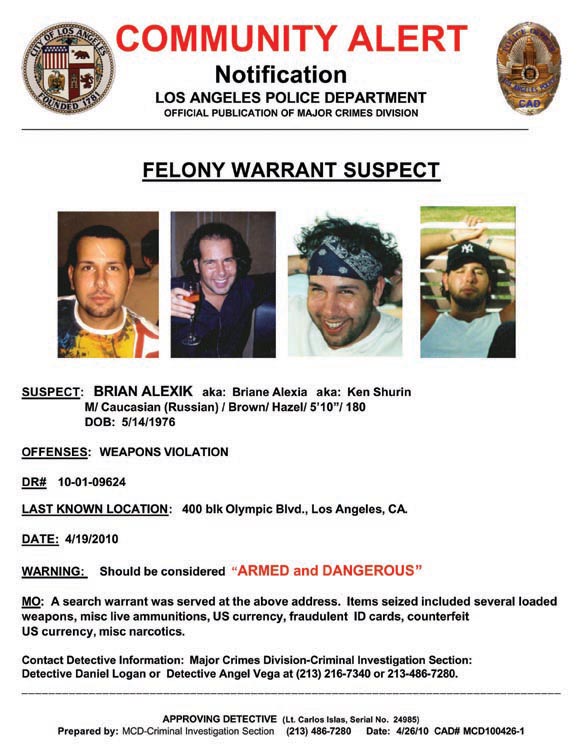 LOS ANGELES—A suspect who managed to escape from authorities on Monday evening, April 19, remains in hiding. Police are now asking for the public’s help in locating him.

On Tuesday, April 27, the Los Angeles Police Department announced that Brian Alexik, 33, is wanted for possession of illegal weapons, the manufacturing of weapon parts, counterfeit currency and narcotics.

“Alexik is wanted on three felony counts stemming from this investigation; possession of assault weapons, possession of a short barrel shotgun and convicted felon with a gun,” said the LAPD in a news release.

Firefighters received a report of noxious fumes which came from a residence on the 400 block of West Olympic Boulevard, where Alexik was staying.

“When they arrived at the location, they were unable to get a response from the resident inside and called for assistance,” said the LAPD.

When officers arrived at the scene, they entered the home after obtaining a search warrant and recovered illegal firearms including an AK47, ammunition, narcotics, fraudulent identification cards and $15,000 in counterfeit US currency.

The LAPD said that Alexik had escaped through a rear window of the apartment complex before police had arrived.

“Based on the evidence recovered at the location, it was apparent that Alexik was illegally manufacturing weapon parts for weapons and printing counterfeit currency,” said the LAPD. “He is to be considered armed and dangerous.”

Alexik is described to be a white man of Russian descent, brown hair, hazel eyes, 5 feet 10 inches tall and 180 pounds.

Anyone who may know of Alexik’s whereabouts is urged to dial 911 immediately, but make no attempt to contact him directly.

People with information is asked to reach Detective Daniel Logan at 213-486-7386.