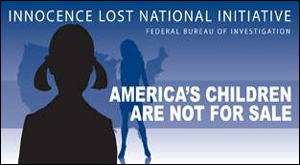 LOS ANGELES—A year-long criminal investigation that was conducted by a multi-agency task force into a human trafficking operation resulted in the arrest of a local man on Wednesday, December 21.  According to a Los Angeles Police Department news release, the arrest of 23-year-old Michael Vincent Pree for sexual assault of a minor was the result of an ongoing investigation by the Los Angeles Innocence Lost Task Force.

During the investigation, police found that Pree allegedly contacted a 12-year-old girl.  After bringing the girl to his residence, Pree forced her to engage in sexual intercourse with him on numerous occasions over the course of one week.  Investigators also found that Pree was allegedly forcing the young girl to work as a street-walking prostitute over the course of the same week.

After arriving at Pree’s residence to arrest him, investigative personnel from the task force served a search warrant and promptly searched the home.  The search turned up additional evidence against Pree linking him to his human trafficking business and was booked into evidence for future court proceedings.  A search on the California Megan’s Law Sex Offender Database and the National Sex Offender Public Registry websites under Pree’s name turned up no records.

The L.A. Innocence Lost Task Force was formed as a part of a multi-agency operation which includes the LAPD, the Los Angeles County District Attorney’s Office, the FBI, the United States Attorney’ Office and the Department of Homeland Security.  According to the FBI’s website which is spearheading the operation, the Innocence Lost Task Force was formed in June 2003 to combat the growing problem of the commercial and sexual exploitation of children through prostitution in the United States.

Operating under the Innocence Lost National Initiative, 43 dedicated task forces and working groups throughout the United States, involving federal, state, and local law enforcement agencies have been created.  As of April 2011, more than 1600 children have been rescued, 719 convictions have occurred and over $3.1 million has been seized.  All of the victims in these crimes were under the age of 18.  The investigation is on-going.

Anyone with further information about the case regarding Michael Pree or any other human trafficking cases is encouraged to contact the Innocence Lost Task Force Hotline at (800) 655-4095.  During non-business hours or on weekends, calls should be directed to (877) 527-3247.  Anyone wishing to remain anonymous should call Crime Stoppers at (800) 222-8477.  Tipsters may also contact Crime Stoppers by texting to phone number 274637 (C-R-I-M-E-S on most keypads) with a cell phone.  All text messages should begin with the letters “LAPD.”  Tipsters may also go to LAPDOnline.org, click on “Webtips” and follow the instructions.