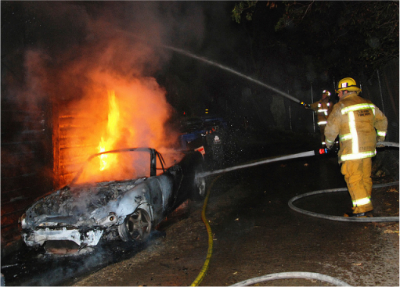 LAUREL CANYON—During the early morning of Friday, December 30, it took 56 Los Angeles firefighters 35 minutes to put out a fire that damaged the former Laurel Canyon home of Jim Morrison, who was the lead singer of The Doors. It was one of 17 arson fire attacks that took place in West Hollywood and Hollywood that night.

At 1:44 a.m., the fire was reported by the Los Angeles Fire Department as occurring at 2000 North Laurel Canyon Blvd., later corrected as being at 8021 Rothdell Trail. It involved a vehicle blaze that extended to the balcony and exterior of the home. As a precaution, vehicle passage through Laurel Canyon Road at Kirkwood Drive had to be prohibited, but was again allowed at 5:11 a.m. for the morning commute.

LAFD firefighters were able to confine the flames to the home’s adjacent parking area before 2:25 a.m. when it was extinguished. One firefighter was hospitalized at a local hospital after he fell from a ladder. He remains in stable condition as a result of having sustained a non-life threatening injury.

Morrison lived at the Rothdell Trail home with his girlfriend Pamela Courson. In 1968, the rock star wrote a poem-turned-song called “Love Street,” which is what he dubbed the street because the couple would sit on the balcony, the one that was recently on fire, and see hippies walking by. The Doors albums “Waiting For The Sun” and “The Soft Parade” were written there. The home is one of three stops along the Laurel Canyon Tour by Doors alumni Ray Manzarek and Robby Krieger.

Real estate data states that the 1,311-square-foot single family home was built in 1922 and renovated in 1950. It was last sold in 2001 for $535,000, which is about one-third the average price for which other homes in the area are currently listed.