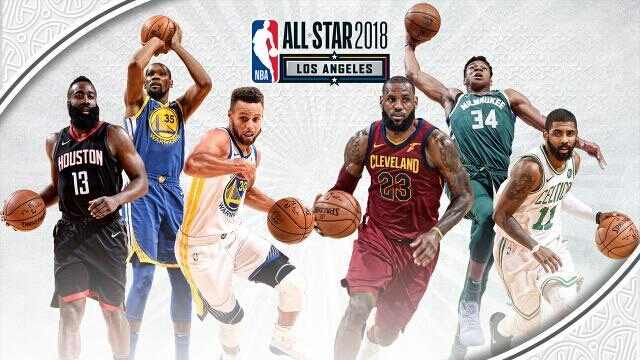 LOS ANGELES—Hollywood has always been the destination to transform and reinvent ones image and identity to remain hip. Its fitting that the 67th NBA All-Star game on TNT is revamping the faded East vs. West conference showdown. On Sunday, February 18 at Staples Center – the league’s two fiercest rivals will face off as Team LeBron takes on Team Steph.

All four major sports have made drastic changes to their All-Star games. The NBA All-Star format is a stroke of genius-where teammates and foes alike will put on a show rich with telenovella drama and subplots for the fans to enjoy. Recent All-Star games have been devoid of competition, one alley-hoop after another. It’s a definite upgrade from the score-gasm.

LeBron James got to pick first since he received the most votes of any player in the league. Curry got to select which color uniform. James chose Curry’s Warriors teammate Kevin Durant. Even more shocking, King James selected Kyrie Irving. Irving played with James for three seasons before demanding a trade last summer, landing with the Boston Celtics to truly be the point guard, while forging his own legacy not in LeBron’s all encompassing shawdow.

The All-Star weekend has an array of concerts, basketball, glitz and glamour from Friday, February 16 thru Sunday ,February 18.

Don’t break your ankles visiting NBA Crossover: It will fill 20,000 square feet of space in The Majestic, an events venue in the Bartlett Building at 650 S. Spring St.

Sadly, no Lakers or Clippers were selected to the All-Star game this year. Complete with Virtual Reality video games and the Larry O’Brien trophy.

Although Clippers guard Lou Williams will particapate in the Taco Bell Skills challenge on Saturday night. I still am in shock we traded Blake Griffin. New Clipper Tobias Harris will take part in the 3-point contest.

All Star Media Day is a first to the public. Tickets are $10 and fans can hear the players discuss the matchup, recent trades and other subjects.

Some two dozen players will participate. It takes place in the Convention Center’s South Hall starting at 11:30 a.m. on Saturday.

The Rising Stars game, arranged in a U.S. vs. the world format, features players including Jaylen Brown, Joel Embiid, Donovan Mitchell and the Lakers’ own Kyle Kuzma and Brandon Ingram.

On Saturday, the All Stars wil hold an open practice to the public. It begins at 11:00 a.m. at the Los Angeles Convention Center.

My favorite event of the weekend is the All-Star Saturday Night festivities starting at 5 p.m. and features the skills challenge, a sort of NBA obstacle course. It is followed by the three-point shootout. Then comes the dunk contest, with players including Victor Oladipo and Dennis Smith Jr. throwing down their best slams.

The NBA Celebrity All-Star game is Friday at 4:00 p.m. on ESPN, also at the Convention Center. It will be Team Clippers vs. Team Lakers.

Come be apart of the Basketball mecca at L.A. Live! I LOVE THIS GAME.