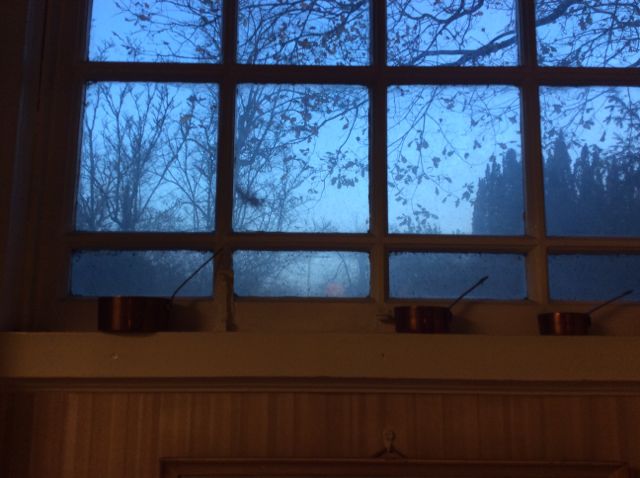 UNITED STATES—Natalie and Oulevar sat around the dining room table with Marina’s family & friends celebrating Natalie’s godson’s 25th Birthday. The 20yr olds were politely ribbing each other. It was very dull. The conversation somehow got onto Stephen Hawking and ‘aw poor, brave man’ when Natalie had to rip: “That’s Stephen Hawking! You’d think he’d be the first to get a bionic makeover, zip around on bionic legs with bionic chest muscles. Being the first and ultimate bionic sex machine. I mean, dude LIVE a little why don’t you? It’s 2015. You’re Stephen Hawking. At least get some laser eye surgery.” The room fell silent, jaws dropped and Marina was the first to peel with laughter followed by all of the wonderful, warm West Berkshire spirit. Oulevar grinned, that was the Icy Barnacles in his mother surfacing.

The next day Marina wrote a letter to the local social security homeless dept. saying that her friend and her son had to leave her house, she was to drive them to Newbury Housing Authority to declare homelessness.

They had been at Marina’s for two months, it was proving difficult to get anywhere with Signing On or social housing even if she did have a minor in tow. She was told she had to be a resident in the country for three months and in the meantime, look for work. There was a lot of paperwork. Marina really was a great friend Natalie was overwhelmed. “What job am I to get that pays more than the cost of a babysitter? I have Oulever to take care of and he’s out of school because the paperwork isn’t filed.” Marina coaxed Natalie into calling Ivy, middle sister and snake who plays both sides. It wasn’t an easy call to make, Natalie didn’t want anything more to do with her venomous siblings, but Marina was good at British diplomacy: “Tell her that you have no choice now but to declare yourselves homeless.” But, Ivy replied in her fake-cheery: “O good luck with that, let us know where you are and send my love to Oulevar.” “I’m not going to send your ‘love’ to Oulevar, you dimwit, how dare you. Up yer Gary.” Natalie had tried to keep her cool, but lost it in a childish frenzy.

Seven weeks before, in the job seeker center she had had her interview with Sandra: “Look at my press, every article and column starts with ‘British Artist’. Yet I’m treated like I’m under suspicion or worse, a criminal by the British establishment. Why is that Sandra? I know it’s not YOUR fault; however, I would like your opinion. How many people have had Page Six NY Post press? The front page: The Bombay Independent, color photograph? Did you know, back then the only other person who got color on the front page was P.V. Narasimha? La Monde? The New York Times? The Brooklyn Museum? Museum of Chicago? Yale British Center etc? O, I can do cleaning, unskilled labor, done plenty of that but WHO can do what I do? No one except me, I’ve been an ambassador for the Arts all over the world and this is what I get after having a run of bad luck with Trademark infringers, piggy backers, plagiarists, bloodsuckers and the like. For a second, Sandra I understood ‘Ricky Gervais takes his Emmy back from Steve Carell.” Natalie had the floor. “I have a new body of work ‘The Zero Originals’ which since, includes destroying all my own artwork there won’t be artwork till the completion of that project.” Sandra had never come across someone like this: “Which will be?” “Well I’m not sure.” She remained the professional “So I’ll put you down as a writer then and you’ll be looking for writing jobs. Yes?” “Yes ok, I’ll look for writing jobs, I don’t mind working the tills at Waitrose. I’d see Marina and all her posh friends come thru. Jokes.” Sandra looked straight at Natalie: “Write it.”

Marina felt for her friend, but they both knew this next step had to be taken. Natalie and Oulevar walked round the fresh carcass of a pigeon on the steps into the Housing Authority building. They sat waiting for 4 hours until a harsh reality version of ‘Cagney and Lacy’ appeared from behind staff elevator doors. More ‘Correctional Officer’ than ‘Help for the Homeless,’ they refused them. “What are we supposed to do, sleep outside the front doors here?” ‘Cagney’ handed Natalie the ‘denying help’ letter addressed to: Natalie Palmer ‘of no fixed abode.’ Living for many years in New York, Natalie spoke up like a New Yorker: “This is something out of Dickens, who writes this shit?” The duo turned and walked away leaving Natalie and her son totally bewildered by the weirdness and incongruousness of this scene.

‘Lacy’ turned and asked Natalie for her siblings telephone numbers, she called Ivy “This is your sister and your nephew. Take them to your mother’s house or sort something out. Come and pick them up, this is Social Services.” Ivy was left no choice. “I’m trying hard not to make a migrant comparison here, but I might get better service if I offered myself to the Chinese as a dissident. That dullard and bore ‘Ai Weiwei has his ass kissed over here.”

In the car headed to London, Natalie held up with a run of jokes ‘Next chapter, a darker more sinister Greys Gardens.’ ‘There’s a domestic cat crisis near Greenham Common, manifesting in specific suicidal tendencies and lack of self-grooming.’ Oulevar continued rapping in the back. Ivy couldn’t bare the agony of these two inside her own house and drove them straight to Mother Palmers.

The Writers were emailing from LA they had found Natalie’s PA, Jennifer Jones (Live&Direcctv) she had gone to work for (*****) Kellogg and Yves had wooed her back, emails to the UCL records Dept were underway. It didn’t take long for another strange, yet fitting response: ‘Dear Jennifer, there is no record to give you of Slade School studio heads, tenured tutors or adjudicators for the period 1980-84. However, I have list of visiting lecturers/teachers: 58 names followed. No mention whatsoever of one of the most revered contemporary British figurative painters straddling the last century, Lucian Freud. Nor studio heads & tutors: Mick Moon, Euan Uglow, Stuart Brisley, Patrick George, Jeffery Camp, Tess Jaray, Bruce McLean, Chris LeBrun, Micheal Craig-Martin to name some. Natalie enjoyed Jennifer’s reply: ‘Very Unusual. At a certain point mis-information or non-information serves the same purpose as factual information, as I’m sure you know. Have a great day.’

Naturally, the deviousness that had occurred around her undergrad Degree shown in 1983 was not the Core of all the transgressions that Natalie Palmer had suffered over and over in her professional life. No prize in these enlightened times for guessing that the root of this evil (to refer to the Catholic upbringing their father insisted upon) began in the house and home that she was born into: The Family Dynamic within The Family of Origin.

It was 56 years later that the fruits of The Ultimate Betrayal was about to flourish or wither. After being threatened by her eldest sister, Henrietta over a gardening bill mother and this daughter realized they had questions. Alarming evidence was found in the study, papers dating back to 2003, everything was making sense. A double whammy: A family betrayal ricocheted loudly into the world, rippling through the very fabric of every dimension. Impacting the essence of any pollinated flower.

Natalie’s mother was shocked to see that four of her five children were after all, plotting to go against the last wishes of her and her late husband. And both mother and daughter were horrified to see that Natalie’s siblings had been engaged in quietly attempting to commit the ‘perfect crime’ using the Silent Killer tactic, often used by the CIA and MI6 and by all the other white collar, British public school and Ivy League psychopaths around the globe.

Natalie’s siblings: Nathaniel and H I V, within the long-term blinding power of their abusiveness (and Ultimate Crime against anther human being) had lost sight of the very element that had first triggered their Envy and Greed: Natalie was smarter and way more creative than all of them.

She helped her mother write letters to the company that held the Two Trust Scheme. A type of loan and reverse mortgage that saved inheritance tax. Good. Some of the clauses screamed porous, malleable scam. Bad. Could this be the next financial Tsunami approaching? A Madoff Enron like crunch folding in on the first wave of affluent, hard working, ethical baby-boomers of the last century. Perhaps there were other elders out there also suckered out of their last wishes by bitter, twisted sibling rivalry. Shakespearean. Operatic: Easy to write as a story difficult to swallow as reality. Natalie was up for the fight. She was of the same DNA.

If she had gone into Property Development, like her brother Nathaniel, this is what she would do with the family home, and the prize real estate of McMallingolds:

Create a gated community of luxury apartments for affluent baby boomers who chose to downsize: Freedom to enjoy their retirement in a highly desirable area while well within reach of West End theatres, the 02, restaurants, airports, trains to Europe and exotic destinations. (Pause) Contracts falling into place with various local services and amenities: Companies brought in the mix enabling multiple tax breaks and grants for the Property Development Company, lets call it ‘Morning Breath LLC’ (NB: Natalie is speculating, names have been changed) The broadband provider would be one of Britain’s most dynamic entrepreneurs: who made his first fortune off Talent. Think Madonna’s first hit. The private Care Company that helps Mother Palmer; ‘Magpies’ with their ‘2nd Stage’ elderly care home facilities nearby, the Podiatrist, the Cleaning Lady team. The ‘Diamond’ Security Company keeping the locks well oiled and Landscaping. A protected Doomsday oak tree: Does it get poisoned over time or danced around on a special day in commemoration of the Iranian Hostage Crisis, 1981? With Tie a Yellow Ribbon Round The Old Oak Tree on speaker. Dawn and Tony Orlando. Government grants would flow either way.

Oulevar sat in the Drawing room with his mom. He desperately wanted to go home he was an American citizen these hostile Britons were no fun at all. He wanted his mom to become an American citizen, and he resolved to Tweet a plea to Obama, surly HE would understand.

Meanwhile, Nathaniel and his wife, Trish had come down from London to take Mother Palmer to an early supper across the road, they had been trying to get her to sign more papers, continuing the further export and manipulation of the House Trust Loan Scheme. As Natalie and the mother had been digging up old papers these two co-conspirators had to move fast to cover their tracks. This stretch of road was notorious, dusk was beginning to fall as the three figures single filed along the sidewalk, a double-decker bus was heading towards them. Someone had to think fast, there was a loud THUD unlike any other and Trish screamed as she and her husband were violently sprayed with limbs, blood and the decapitated head of Mother Palmer.

Natalie heard a loud screech of tires another car accident on that road, followed by the thud of a late mail delivery through the front door which left one question remaining: ‘I wonder if brother Nathaniel and H I V have the same idea?’ Amongst the mail, Natalie had received a postcard from Miami, it read: ‘Loyalty is Royalty.’ Her painter friend Richard Kurtz had sent her an invitation card. The BT Hub had also arrived, finally some Internet service for McMallingolds.

Her first tweet and postings read: ‘If something BAD happens to myself or Oulevar know this, it would be NO accident.’