UNITED STATES—One hundred years ago we considered cognition (thinking), affect (feeling), and conation (actions) to be the Three Faculties of the Mind.

Great thinkers debated the terminology that would be used to describe the importance of EACH of the TRIPARTITE, and they still debate. Now it is up to the modern psychologist (or their employer) to decide what theory they subscribe to, and THAT will dictate the specific terminology.

Two centuries of solid research has been done, revealing plenty about cognition, or thinking. We have studied patterns of thought and implemented educational requirements to ensure that children have the right to learn. Cognitive disorders have been identified, and Comer’s Fundamentals of Abnormal Psychology (2005, p. 82) tells us that they are usually attributed to “maladaptive assumptions and attitudes, specific upsetting thoughts, and illogical thinking processes.”

Conation is how we act, as sparked by volition, desire, and striving. Many of the philosophical greats considered conation to be an understudied topic of psychological functioning in comparison to their understood counterparts: cognition and affect.

Irregular affect tampers with the way we feel. Cognitive disorders disturb the way we think.

With this understanding then, it would make sense that disorders of conation would be those that have a basis in human choice. An example would be addiction: the aftereffect of using FREE WILL to make the CHOICE to use a substance. The addiction comes after the choice is made but society allows people to NOT be responsible for that choice, blaming the substance instead.

This image is my attempt to explain a very confusing and debate-provoking topic, as I see it. Hopefully it’s right, and if not feel free to message me. 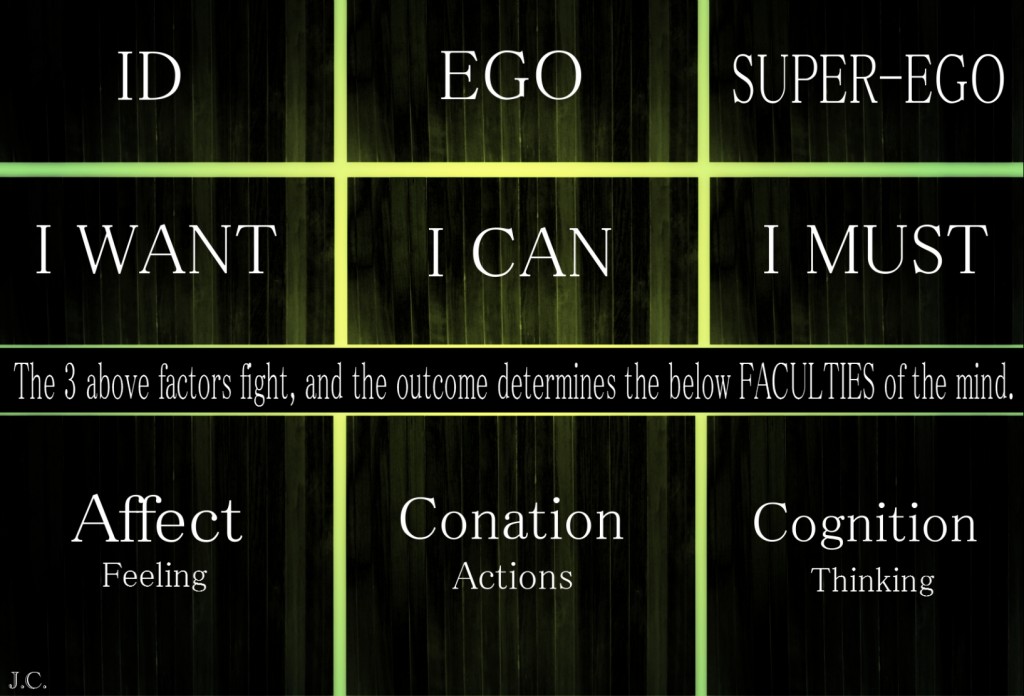 Cognition, conation, and affect are highly susceptible to damage during youth. As 17th century John Locke says “consider new born children, we shall have little reason to think that they bring many ideas into the world with them.” Children are a blank slate, or TABULA RASA, parents will influence the development of the three important faculties of the mind by teaching what they CAN or MUST do.

It is time to consider all three faculties as equally important. We know how to raise smart kids, and Intelligence for the Year 2001 tells us “Intelligent behavior in the real world requires a synthesis of cognition, conation, and affect.”

The problem? Conation is considered an obscure word, and I think I know why.

After much research I believe MAN has (nearly) let the term conation, or conative functioning, disappear from our language because it reinforces how humans have free will to choose their actions. To understand conation as such would be an admittance that men are responsible for their actions, including all types of travesties that continued for centuries.

I call it the JUDGE NOT LEST YE BE JUDGED bias. Men of decades past would have feared restricting the freedoms of other Americans, especially behind closed doors. It would have set precedent for the same thing to happen to them in the future.

There is NO OTHER REASON that explains why so many studies were done on AFFECT and COGNITION, while letting the term CONATION slip from the American vocabulary.

Back to the image above for a moment. Alex Thio’s Deviant Behavior reminds us that the ID is governed by the PLEASURE PRINCIPLE and the EGO is controlled by the REALITY PRINCIPLE. This is where humans go awry.

The Id wants whatever is pleasurable while the Super-ego acts as a do-gooder telling the Id IF and HOW it is wrong, immoral, as well as the consequences. It is the EGO who evaluates the WANT vs MUST, REALISTICALLY determining what the Id can or cannot do.

You MAY now believe as I DO: man used discretion to allow the term CONATION to disappear because he knew that one-thousand years of studies were done on the inner workings of the mind and that CONATION is the term that makes humans accountable for their actions.

In closing I would like to mention that research led me to a business consulting firm called Kolbe Corp. They have a website explaining the ever-important CONATION and how it helps them help businesses. Learning and intelligence DOES help create a more well-rounded person, and can help redirect an individual’s perspective to be healthy, responsible and productive. Kolbe has taken a smart approach that needs to be incorporated into the making of a New American set of ideals.