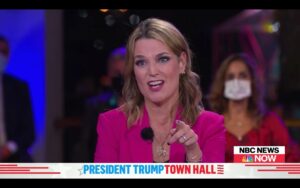 Guthrie began interrupting President Trump at the beginning of the interview and continued throughout.

The first subject addressed was White supremacy. Guthrie questioned Trump’s position on a conspiracy theory regarding the group, QAnon. Trump chastised Guthrie for starting with that question and let her know that he knows nothing about QAnon. “Why don’t you ask Biden if he denounces ANTIFA?” Trump asked.

Question one from the crowd came from a person who voted for Hilary Clinton in 2016. She asked why the President only put a travel ban on China. “Everyone was against the travel ban. It was far earlier than Fauci, the scientist, Pelosi…Biden said it was ridiculous.”

“[After the pandemic], How are you going to get America back on track?” An attendee asked.

“11.4 million jobs and a phenomenal third quarter to be announced November first, GDP through the roof, real estate…,” he responded.

On the issue of affordable healthcare, Guthrie pointed out that SCOTUS is currently attempting to get rid of the remainder of Obamacare. President Trump indicated that they were protecting people with pre-existing conditions, terminating Obamacare, and replacing it with something much less expensive.

Guthrie asked, “Why should the American people give you a second chance?”

“Because I’ve done a great job,” he replied.

Joe Biden was interviewed at the Center of the Constitution in Philadelphia, Pennsylvania by ABC News correspondent, George Stephanopoulos.

A member of the crowd asked Biden if he thought that the Supreme Court nominee, Amy Coney Barrett should be a cause for concern for the LGBTQ community.

Biden indicated that there was a cause for concern and went on to speak of affordable healthcare and his concern for people with pre-existing conditions. “I taught constitutional law for 21 years,” said Biden.

Stephanopoulos questioned Biden about packing the court, then asked Biden, “President Trump is President for all for years, isn’t he?'”

“If I answered the question directly the focus would be on what will Biden do if he wins? Rather than what is happening now,” Biden stated.  “But don’t voters have a right to know?” Stephanopoulos asked.

“What you should do is you gotta make sure you vote and vote for a Senator who in fact thinks reflects your general view on constitutional interpretation and vote for a President you think is in line with you,” Biden advised.