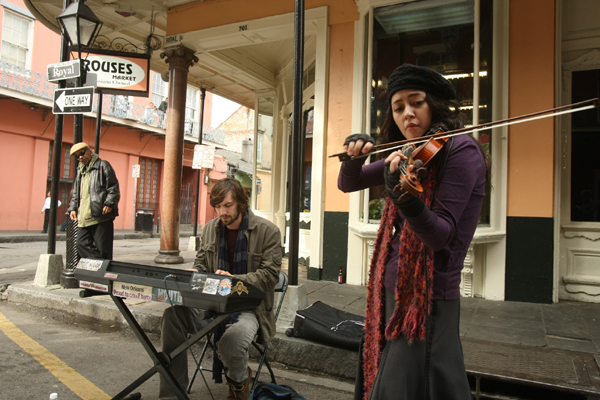 HOLLYWOOD —The one-hour drama series “Treme” launches its 10-episode first season on Sunday, April 11, (10-11:20 p.m. ET/PT) on HBO. From David Simon (“The Wire,” “Generation Kill,” “The Corner”) and Eric Overmyer (“Homicide: Life on the Street,” “The Wire”), the show follows musicians, chefs, Mardi Gras Indians and ordinary New Orleanians as they try to rebuild their lives, their homes and their unique culture in the aftermath of the 2005 hurricane and levee failure that caused the near-death of an American city.

“Treme” begins in the autumn of 2005, three months after Hurricane Katrina and the massive engineering failure in which flood control failed throughout New Orleans, flooding 80 percent of the city, killing hundreds and displacing hundreds of thousands of residents. Fictional events depicted in the series attempt and succeed in honoring the actual chronology of political, economic and cultural events following the storm.

The drama unfolds with Antoine Batiste, a smooth-talking trombonist who is struggling to make ends meet, earning cash with any gig he can get, including playing in funeral processions for his former neighbors. His ex-wife, LaDonna Batiste-Williams, owns a bar in the Central City neighborhood and splits her time between New Orleans and Baton Rouge, where her children and new husband have relocated. Concerned over the disappearance of her younger brother David, or Daymo, unseen since the storm, LaDonna has turned to a local civil rights attorney, the overburdened and underpaid Toni Bernette, for help. The government’s inconsistent and ineffectual response to the devastation has spurred Bernette’s husband Creighton, a university professor of English literature and an expert on local history, to become an increasingly outspoken critic of the institutional response.

“TremÃ©” resident Davis McAlary, a rebellious radio disc jockey, itinerant musician and general gadfly, is both chronicler of and participant in the city’s vibrant and varied musical culture, which simply refuses to be silent, even in the early months after the storm. His occasional partner, popular chef Janette Desautel, hopes to regain momentum for her small, newly re-opened neighborhood restaurant. Elsewhere in the city, displaced Mardi Gras Indian chief Albert Lambreaux returns to find his home destroyed and his uptown tribe, the Guardians of the Flame, scattered, but Lambreaux is determined to rebuild. His son Delmond, an exile in New York playing modern jazz and looking beyond New Orleans for his future, is less sure of his native city, while violinist Annie and her boyfriend Sonny, young street musicians living hand-to-mouth, seem wholly committed to the culture of the Crescent City.

As the story begins, more than half the population of New Orleans is elsewhere and much of the city is wrecked, muddied and caked in mold, while other neighborhoods ”“ in “the sliver by the river,” as locals call it ”“ remain viable. But the tourists have yet to return, the money that follows them is scarce, and residents can take solace only in the fact that the city’s high levels of crime have migrated to Houston and Baton Rouge. And for those returning, housing is hard to come by, with many people waiting on insurance checks that may never arrive.

In addition to Simon and Overmyer, TREME is written by David Mills (HBO’s “The Corner” and “The Wire”) and George Pelecanos (“The Wire” and the HBO miniseries “The Pacific”). Additional writers include New Orleans natives Lolis Elie (author and columnist for the New Orleans Times-Picayune) and Tom Piazza (author of the novel “City of Refuge” and “Why New Orleans Matters”).