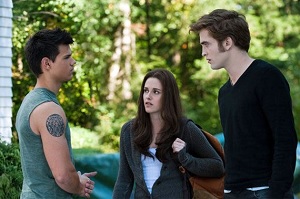 HOLLYWOOD—The phenomenon known as “Twilight” has transformed pop culture and the theater experience.  Whether you’re a twi-hard fan or someone from the outside trying to figure what all the fuss is about, you are intrigued by it.  “The Twilight Saga: Eclipse,” the third chapter in the highly successful series is the best film so far.

I’ll admit I had my doubts going into the film. I thought it was going to be another exhausted love story between Bella (Kristen Stewart), Edward (Robert Pattison) and Jacob (Taylor Lautner).  For the most part it is, but this time that love triangle is taken to new heights.  When we last left Edward, Jacob and Bella, Edward had popped the question to Bella, leaving both the audience and Bella stunned.  Stewart infuses vulnerability in Bella that forces the audience to both love and hate her.  We want her to make a choice, either its Edward or its Jacob.

To complicate the situation, someone has been building an army of vampires to dine on Bella and the citizens or Forks, Wash.  Who could be behind this madness?  Victoria (Bryce Dallas Howard), the vengeful vampire whose ultimate goal is to destroy Bella.  She’ll go to great lengths to make sure Bella pays for the demise of her lover James.  The vampire army is lead by Riley (Xavier Samuel), a local Forks resident who has been missing for months. This forces the werewolves and the vampires who are mortal enemies to join forces to protect Bella.

“Eclipse” finally gives more members of the Cullen family tree screen time.  Rosalie’s (Nikki Reed) back story on how she became a vampire is heartbreaking to say the least; we finally get an understanding surrounding her issues with Bella and her desire to become a vampire against all odds.  The same applies for Jasper (Jackson Rathbone) as viewers receive ample slices of his life before becoming a vampire and Emmet (Kellan Lutz) finally gets plentiful screen time as the Cullen family and werewolves prepare for battle against the vampire army in an action packed sequence that is worth the wait.  Even the family matriarch and patriarch Esme (Elizabeth Reaser) and Carlisle (Peter Facinelli) get in on the action.  Of course we can’t forget about Alice (Ashley Greene) whose ability to see glimpses of the future, keeps the gang a step ahead.

In the end, the film is a matter of the heart and what it yearns for versus what it wants.  Bella wants to have her cake and eat it too.  There are some incredibly tense scenes between Jacob and Edward where you feel like the two should be at each other’s throats, but out of respect for Bella they let their testosterone settle down.  Jacob’s fury is a bit more convincing than Edwards, considering he’s the one who continues to place his heart on the line.  The climatic kiss between Jacob and Bella is emotional for everyone because Bella finally admits her feelings for Jacob; he’s more than just a friend.  Edward is at his most vulnerable when he has to see the woman he loves be taken care of by his mortal enemy because of his inability to keep her warm during a snowstorm.  The tension between the two is great as they take jabs at one another.

Screenwriter Melissa Rosenberg captures effortlessly that element of suspense that keeps the audience intrigued and director David Slade provides such precise staging that as an audience member you feel as if you’re immersed in this saga as much as the characters.  There’s never a boring moment in the film; whether it’s the action scenes or perfect comedic timing by Jacob or Charlie (Billy Burke), it keeps the audience salivating for more.  You find yourself picking a side.  Either you’re on Team Edward or Team Jacob.  What works well for “Eclipse” is that we discover the power of the concept of love and how influential it can be on the heart.   We’ve all encountered that person that makes us feel special and many of us have had those crushes where we like someone more than they actually like us.

That’s why “Eclipse” prevails over its predecessors it teaches us a valuable lesson: the heart knows what it wants even if the brain tells you otherwise.  In life we’re forced to make decisions.  Bella has two suitors who are willing to do anything to protect her, and while her heart is torn between the two she knows whatever choice she makes she’ll have to live with it and the consequences that come with it.  Let it be known I’m officially a fan and I can’t wait to see “Breaking Dawn.”