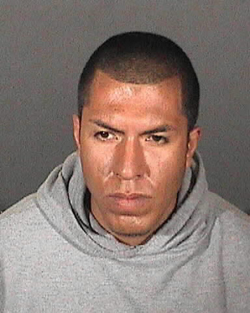 HOLLYWOOD—Two suspects have been apprehended in what appears to be a motor vehicle theft ring. The suspects targeted vehicles in subterranean parking lots within the areas of Korea Town, Rampart, Wilshire and Hollywood. On April 10, at about 4 a.m., Alejandro Torres and Jesse Torres were arrested and booked at Olympic Station.

According to the Los Angeles Police Department, “The suspects would enter the parking garages and fill empty backpacks with clothing, sports apparel, GPS devices, cameras, sunglasses, designer purses, jewelry, watches, ID cards and other items commonly found inside a car. The suspects would then store the backpacks in local motels. In one motel room, the investigating detectives found several backpacks filled with a variety of items.”

The thefts have been reported since January, where officers investigated “about 20 locations where property was stole from parked cars.”

The stolen items are expected to be returned to the owners; therefore, detectives are encouraging victims of car theft in the areas targeted by the 22-year-old suspects to come forward and call Detective Ron Kim, Olympic Property Crimes Unit at 213-382-9370, or 213-382-9440. Detectives will assist victims of these thefts in retrieving their stolen property.

During non-business hours or on weekends, calls should be directed to 1-877-LAPD-24-7. Anyone wishing to remain anonymous should call Crimestoppers at 1-800-222-TIPS (800-222-8477). Tipsters may also contact Crimestoppers by texting to phone number 274637 (C-R-I-M-E-S on most keypads) with a cell phone. All text messages should begin with the letters “LAPD.” Tipsters may also go to LAPDOnline.org, click on “webtips” and follow the prompts.