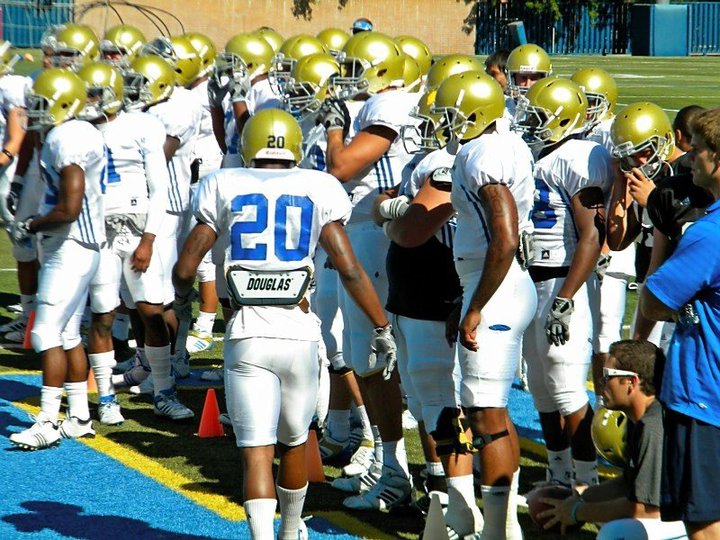 WESTWOOD—Camp has moved into the second week, and even though the weather has been a little hotter, the intensity level in practice has done nothing but gone up every single time. Like I said before, the Bruins are not just looking to improve on their 7-6 record last season, they are trying to be the best in the Pac-10 and play in a January bowl game.

The defense has had a lot of great players over the years such as Alterraun Verner, Bruce Davis, Chris Horton and Brigham Harwell just to name a few, and has allowed the Bruins to gain an identity in their conference and around the country as a defensive football team. Since 2005, offense has been a real sore spot for the Bruins, but this year the offense seems to have found its swagger.

One player that is partially responsible for this change in attitude is wide receiver Ricky Marvaray. If you happen to stop by and watch a UCLA practice this fall, just look for number 20, and then wait for a few minutes to be blown away. Offensive players are sometimes labeled as passive and soft, while players on the defense are seen as tough guys that would probably hit you if you just looked at them too long. Marvaray has brought a defensive attitude to the Bruin offense. He attacks the ball when it’s in the air, doesn’t shy away from contact when it comes to blocking down the field, and is not afraid to show his emotion and passion for the game. In every practice he continues to strive to get better and always seems to make a big play when the offense needs one.

Ricky Marvaray has been a bright spot for the Bruins in camp, but he is not the only reason the UCLA offense has been giving the defense trouble. The downhill running game and a cohesive offense line is the reason big plays in the passing game havebecome a lot more routine. Veteran running backs Derrick Coleman and Jonathan Franklin have adapted well to the new offense and have been consistently breaking through the front seven of the bruin defense for long runs. Freshman Malcolm Jones has been a nice addition to the running game and during a short scrimmage last Tuesday during practice, he showed why he was the Gatorade National Football Player of the Year. He broke a couple of tackles with two well-placed stiff arms and raced up the sideline before he was tackled short of the goal line.

Before camp started for the Bruins, the projected standings came out for the Pac-10 and UCLA was picked to finish eighth out of the 10 teams in the conference. The football team has taken that to heart during camp and has set out to prove all those people wrong. There is still a lot of work to be done, and no matter how well practice goes one day, there is always room to improve the next time we hit the field. We have not won any games yet and it is nowhere near January, but those will be the results if the Bruins continue to work the way they have.