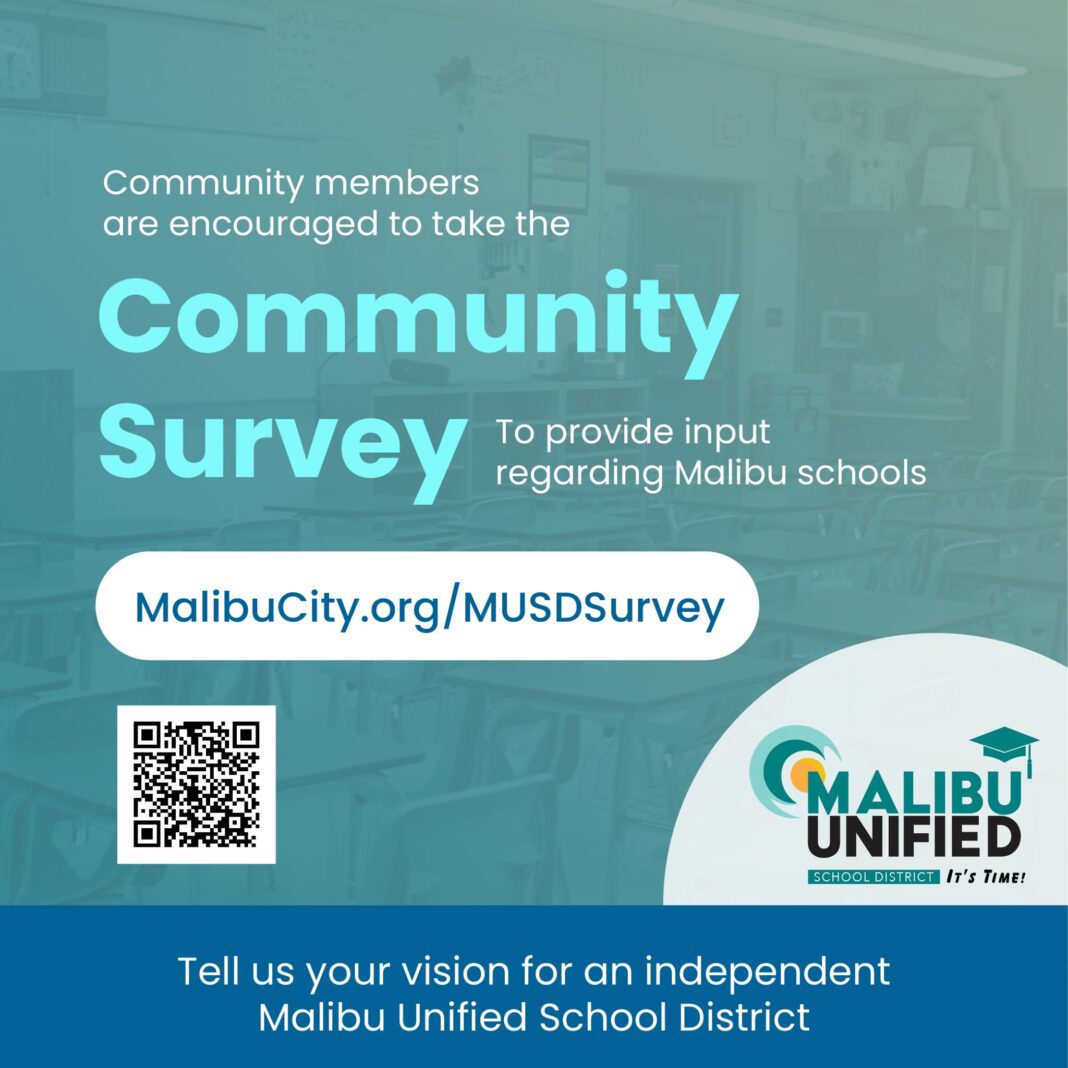 MALIBU—The city of Malibu announced in a news release on Friday, October 29, that as part of its ongoing effort to form an independent Malibu Unified School District (MUSD), they are launching a community visioning project to develop a set of community values to serve as a roadmap for the development of the proposed district.

As part of this process, a survey is being launched to solicit feedback from community members regarding what they value and what they want from the future MUSD. Community members are asked to complete the online survey by Friday, November 12. The survey is available at: www.MalibuCity.org/MUSDSurvey. A Spanish language survey is available at: www.MalibuCity.org/EncuestaMUSD.

“Schools are integral to our community. We need local control of our schools so that they may reflect our community values. This is why school district separation remains one of the top priorities of the City and why I urge everyone to complete this survey and let their voices be heard,” said Mayor Paul Grisanti.

The city formed a Planning Committee composed of Malibu school parents and engaged educational experts. The community survey will obtain demographic information and discuss topics related to school leadership, culture and areas of focus. In addition to the survey, Malibu will be conducting a series of focus groups with individuals representing different community groups as well as a larger meeting with diverse stakeholders involved in Malibu schools to help improve the community’s values be reflected in MUSD.

In November 2017, the city of Malibu submitted a petition to form an independent MUSD and requested that the preliminary public hearing be postponed to allow time for the city and the Santa Monica Malibu Unified School District (SM-MUSD) to negotiate the financial terms of separation. Malibu spent nearly three years trying to negotiate with SM-MUSD. In October 2020, after recognizing that the negotiations had stalled, the Malibu City Council requested that the County Committee move forward with the city’s preliminary petition.

During the regular review process, Malibu will be able to demonstrate that its petition will substantially meet all nine of the criteria for school district organization established by the California Department of Education. The results of the MUSD visioning project will be used to notify Malibu’s response to Criteria 6, which focuses on education programs.

All community members are asked to complete the survey regardless of whether or not they have school-aged children. For more details on the city’s effort to form an independent MUSD and how to get involved, visit www.MalibuCity.org/musd.