UNITED STATES—President Donald Trump has ensured the public that the American government will assist in helping with the release of incarcerated rapper, A$AP Rocky and ensuring that he will be “treated fairly” in a Swedish jail. President Trump tweeted that he would “personally vouch” for the rapper’s bail if he is released from the custody of Swedish authorities.

On July 2, Rocky, whose legal name is Rakim Mayers, was deemed by a Swedish court to be a flight risk and detained after video footage which was published on the rapper’s Instagram, that depicts Rocky and members of his entourage fighting with a pair of men.

The artist captioned the clip with his version of the incident: “SO A FEW DRUG ADDICTS ARE NOT MY FANS, WE DONT [sic] KNOW THESE GUYS AND WE DIDNT [sic] WANT TROUBLE, THEY FOLLOWED US FOR 4 BLOCKS…GIVE ME A BREAK.”

The detainment has disrupted a string of international performance dates, including planned shows in London, Dublin, Oslo, and Gdynia, Poland. Rocky missed concerts in Moscow and at seven other festivals across Germany, Belgium, Italy, Spain, and Ukraine.

Fellow A$AP Mob member A$AP Ferg reached out to his followers via Instagram and posted a picture of Rocky claiming that he is “in solitary confinement with no visitors or phone call privileges.” Ferg says that he faces up to six years in prison if convicted “just for defending himself in a fight.”

The video shows several men in the video attempting to antagonize A$AP Rocky and his entourage by following them over alleged headphones that were damaged by a member of the rapper’s crew earlier in the day. In the video, someone can be heard informing the two guys to head in the other direction.

On Friday, July 19 President Trump expressed his affinity to the rapper’s incarceration upon speaking to Kanye West.

“I will be calling the very talented Prime Minister of Sweden to see what we can do about helping A$AP Rocky. So many people would like to see this quickly resolved,” the president tweeted. 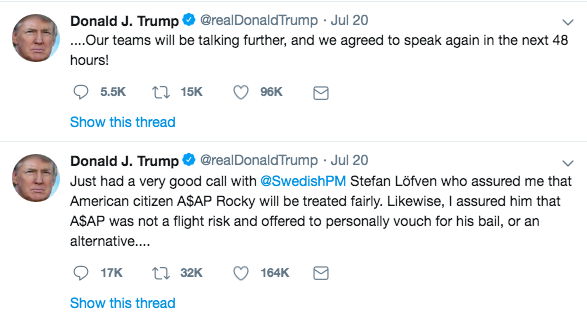 Hip-hop artists and celebrities shared a Change.org petition demanding the rapper’s release. So far the petition has raised over 625,000 signatures.

Swedish Prime Minister Stefan Löfven has not commented on A$AP Rocky’s arrest via social media. The investigation of A$AP Rocky’s alleged assault has to be completed by Swedish authorities by Thursday, July 25.