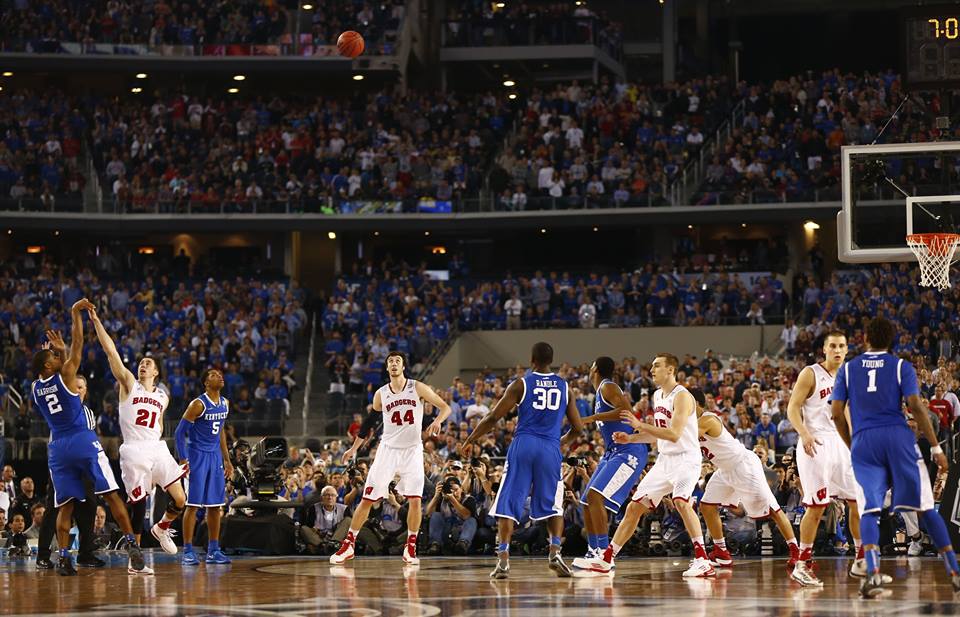 Kentucky freshman Aaron Harrison made an unbelievable three pointer with 5.7 seconds left to beat the Wisconsin Badgers 74-73 in the second national semifinal on Saturday. The Wildcats make their second appearance to the final game for the second straight time to face UConn on Monday night.

The Badgers came into the final four a Cinderella team with a high seed, as they came far to face one of college basketball’s powerhouse teams. They began the game in surprising fashion playing the way a number two seed should.

Wisconsin went on an 8-0 run through five minutes of the first half after running neck and neck with the Wildcats from the start. Kentucky began to fight back to pull within two possessions with 10 to go as the starting five, with Julius Randle scoring six points in the last three minutes to be down four at the half.

Kentucky came out in the second and scored seven straight to take the lead away from Wisconsin before they were in need of a timeout. It didn’t help them as they watched the Wildcats go up eight after a television timeout came to their aid. By then, the offense turned around for the Badgers to pull close 56-55 with 11:30 left on Ben Brust’s three pointer and pair of free throws.

Wisconsin saw the lead again one last time with Nigel Hayes scoring on a jumper that put them up by three. Traevon Jackson with help from Frank Kaminsky tallied seven points.

The two teams played tight with seconds left as Wisconsin held a 73-71 lead with Jackson making back to back free throws with 16 seconds left. On the pass back into play, Kentucky’s Andrew Harrison found the freshman guard open to shoot a clean three pointer through the basket to go up 74-73 with seven seconds left. Completely stunned, the Badgers had to take a timeout and regroup in order to make their possession count and win the game. The ball was given to

Jackson where his two point attempt went unanswered as they fell hard at the sound of the buzzer.

It was anyone’s game to win and the better team moved on with the smallest marginal victory since the NCAA realignment took place two years ago. Kentucky advances to their 13th final in the school’s history fighting for their ninth national title.

Wisconsin saw the best out of their team as they reached the closest they’ve ever been since1941.  That record will stand for more years as they will miss out on Monday’s match that is a rematch of the 2011 national semi between Kentucky and UConn showing different results.