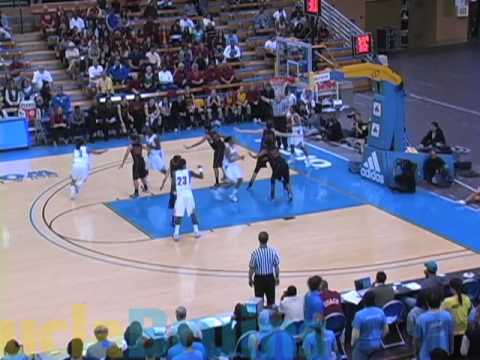 WESTWOOD—The UCLA women’s basketball team is off to its best start in over 20 years and senior Darxia Morris has been an instrumental component to the team’s success. In the last two games against then 12th ranked Notre Dame and the formerly undefeated UC Davis, Morris has averaged 15.5 ppg, four rebounds, five assists and four steals to help her team to victory in two very tough games.

Against Notre Dame, the Bruins were getting an early chance to see just how good their team was. Throughout the game neither team could gain the upper hand. When it seemed like one team was poised to pull away, the other would bounce right back and even the score. In all there were 12 ties and 18 lead changes during the double overtime thriller.

With both teams struggling to secure the win, Morris decided to step up in the second overtime and give the win to the Bruins. After tying the game in regulation with a 3-pointer, Morris started off the second extra period with another three-ball to give UCLA the early lead, and with 4.2 seconds left she stole an inbounds pass that allowed her to seal the victory with two free throws. The final score was 86-83 with five of the seven points in the final period coming from Morris. Star forwards Jasmine Dixon and Markel Walker also played huge parts in the upset. Dixon finished with 18 points and 11 rebounds, while Walker chipped in with 16 points of her own. The game held special meaning for senior Doreena Campbell after she hit a jump shot during the first half to become the 24th woman to score 1,000 points as a UCLA basketball player.

In their next game against UC Davis, the Bruins were looking to avoid that customary letdown teams sometimes have after winning a big game. Once again Darxia Morris led the way for the Bruins, filling up the stat sheet with 14 points, seven assists and five steals. Despite 29 turnovers, the team was able to use their stingy defense and great execution on offense to jump out to a 32-21 lead at halftime and eventually win the game 65-49. The win pushed the Bruins to 4-0, their best start since 1986.

So far the women’s team has enjoyed a lot of success, but they are not letting the praise they have received so far go to their heads. Beating the Fighting Irish of Notre Dame moved the Bruins up two spots in the rankings to number 13, but they are not satisfied.