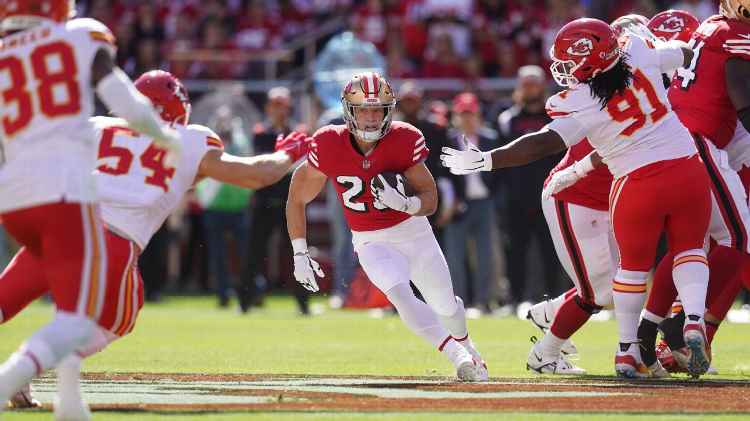 San Francisco utilized McCaffrey in the offense effectively as the Niners opened the game with an early field goal. On the ensuing possession, Chiefs Quarterback Patrick Mahomes threw an interception to Talanoa Hufanga.

Regardless of the score the Kansas City Chiefs will usually make a stunning comeback, it’s not a matter of if but when. Trailing by double digits is exactly what the doctor ordered to get the Chiefs going.

Mahomes proceeded to lead the Chiefs to touchdowns on six of their next seven drives. Mecole Harman did his best Deebo Samuel impersonation scoring on two TD runs while JuJu Smith-Schuster had his breakout performance as a new member of the Kansas City Chiefs.

Smith-Schuster had seven receptions for 124 yards including a 45-yd reception where his speed in the open field was evident, gliding past every 49er defender into the end zone practically untouched.

“To go out against a defense like this and show that we can still be explosive and have those big plays, I think that will bode well for us as the season goes on,” said Mahomes postgame. Mahomes threw for 423 yards and three touchdowns in the victory.

The Niners have lost consecutive games falling to (3-4) in the congested NFC West. McCaffrey had an impressive debut, finishing with 62 all-purpose yards on 10 touches. San Francisco had their chances, but settled for three field goals making it difficult to punch it in the end zone.

“We definitely had our chances, it’s a great team and we gave them too many easy ones,” said 49ers Defensive End Nick Bosa. After missing week 6 with an injury, Bosa recorded his NFL leading seventh sack of the season.

Sunday was National Tight Ends Day, and George Kittle was going to put his mark on this holiday. One of the leagues premiere Tight Ends racked up 6 catches for 98 yards, including his first touchdown of the year.

Turnovers and penalties cost the 49ers an opportunity to make this a close game. They recovered a muffed punt at the Chiefs 12-yard line. Rather than capitalizing on that error, Garoppolo was intercepted by rookie Joshua Williams.