UNITED STATES—Gage Halupowski, 24, who was a member of the hate group, “Antifa,” which stands for anti-fascist has been sentenced to close to six years in prison for the assault of conservative demonstrator Adam Kelly on June 29, in Portland, Oregon.

Kelly came to the defense of an older man who was being attacked, when Halupowski struck him in the back of the head. Kelly suffered a concussion and sustained a laceration that required 25 staples. Halupowski pled guilty to second-degree assault on Friday, November 1, where he will spend 70 months in prison. 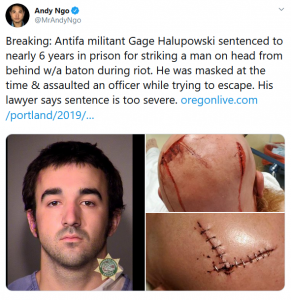 Masked men who reportedly aligned themselves with @RoseCityantifa, assaulted a conservative journalist, Andy Ngo, along with three police officers back in June, PJ Media and Ngo reported.

Maria Dehart, 23, and James Stock, 21 were arrested in connection to the attacks. Ngo was hospitalized after the assault. The protest and counter-protest were planned protests between Proud Boys and Antifa. Pepper spray, and a “milkshake” liquid (similar to a thick cement-like substance) was used, including weapons during the attacks.

No Arrest Made A Month After Antifa Attack

Footage of the assault on Kelly was captured depicting him being hit in the head with the baton and pepper-sprayed.

On September 27, Paul J. Salerno posted on Facebook that Halupowski was detained in jail for three months and suggested, “writing comrades is the easiest way to support our comrades when they are locked up.”

Multnomah County Deputy District Attorney, Melissa Marrero indicated that Halupowski hitting kelly in the back of the head with an expandable baton was, “completely unexplainable, completely avoidable, and didn’t need to happen.”