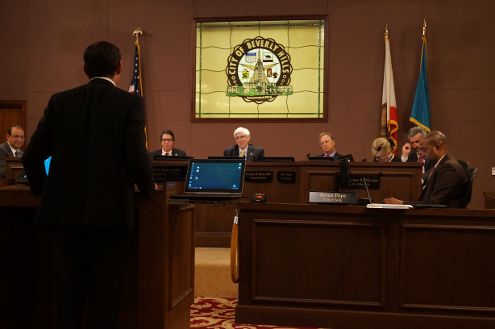 The partnership between the city and state attempts to promote “an exchange of ideas and resources in the areas of water conservation and management, technology and cyber security, public health, emergency services, disaster preparedness, public safety, counter terrorism and art and culture,” according a press release from the city of Beverly Hills.

The agreement comes a little over three months after their informal partnership was announced on May 22, headed by Beverly Hills Mayor Julian Gold M.D. and Israel Consul General David Siegel. In June, the Beverly Hills City Council saw a presentation detailing plans and potential projects for the partnership.

Mayor Gold believes this agreement will result in many positive changes for the city. “Beverly Hills will greatly benefit from Israel’s leadership in many areas that are of great concern and interest to our community,” said Gold.

Representatives from Israel also expressed optimism at the partnership.  “The combined strengths of Israel and Beverly Hills will be highly impactful as we work together to address our shared challenges,” said Consul General David Siegel. “In particular, we are eager to share our solutions for water conservation and assist the City during this severe drought.”

The formal declaration-signing ceremony will be held on November 10, 2015 at the Wallis Annenberg Center for the Performing Arts. It will take place during the Duet Gala, which will include cocktails, a post-dinner party and a concert featuring Maestro Zubin Mehta conducting the Israel Philharmonic Orchestra. The event will benefit American Friends of the Israel Philharmonic Orchestra. In order to purchase tickets or get more information about the event, visit http://thewallis.org/duetgala.