The law prevented taxpayer funds to be used by establishments that counseled on, referred, or performed abortions in the U.S. and abroad.

According to the memorandum, federal funds will now be used to fund abortions in the U.S. and overseas.  The details may be found in section 2 of the Memorandum which reads:

(f.) The Secretary of State, consistent with applicable law and subject to the availability of appropriations, shall:

(i) Take the steps necessary to resume funding to the United Nations Population Fund: and

(ii) Work with Administrator of USAID and across United States Government foreign assistance programs to ensure that adequate funds are being directed to support Women’s health needs globally, including sexual and reproductive health and reproductive rights.

“This Executive Order is antithetical to reason, violates human dignity, and is incompatible with Catholic teaching. We and our brother bishops strongly oppose this action.”

Catholic bishops urge President @JoeBiden to reject abortion. The Archbishop of @archkck and the chairman of the @USCCB's Committee on Pro-Life Activities, Joseph Naumann, joins to share what goes through his mind as he witnesses pro-abortion policies being put forward. pic.twitter.com/rqNI2Cl79G 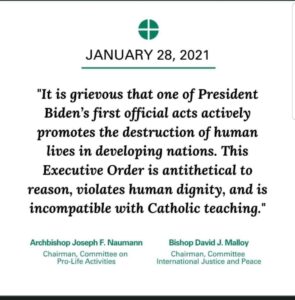 “Well, it’s a sad day for the Nation, but it’s a sad day particularly for us as Catholics to see a President who professes to be Catholic to do these things that are so contrary to our Moral teaching,” said Archbishop Naumann with EWTN News Nightly..

On January 24, 2020, Trump spoke at the annual Pro-Life March and Rally held in Washington D.C., where he touted pro-life accomplishments of the administration which began the first day he was in office. Such accomplishments include:

2. Governing the use of title X taxpayer funding-No tax-payer funds used to fund agencies that perform or refer for abortions

3. Making clear at the United Nations that global bureaucrats have no business attacking the sovereignty of nations that protect innocent life.

“All of us here today understand an eternal truth. Every Child is a precious and sacred gift from God. Together, we must protect, cherish, and defend the dignity and the sanctity of every human life. When we see the image of the baby in the womb, we glimpse the majesty of God’s creation. When we hold a newborn in our arms, we know the endless love that each child brings to a family. When we watch a child grow, we see the splendor that radiates from [the] human soul. One life child changes the world,” said Trump.