BUFFALO, NY—On Saturday, June 6, two officers of the Buffalo Emergency Response Team, Aron Torgalski, 39 and Robert McCabe, 32 were charged with felony assault in the second degree and both officers pleaded not guilty.

On June 4, 75-year-old protester, Martin Gugino approached the Buffalo Emergency Response Team waving his phone in his hand when they were enforcing curfew in front of City Hall at a protest. Video surfaced of Torgalski and Mccabe shoving Mr. Gugino down to the ground resulting in Gugino bleeding from his ear and being hospitalized. Torgalski was seen pushing him while McCabe was seen extending his baton onto Gugino.

A witness at the protest (we will call him Joe) went on Instagram live while Gugino and a group of protesters were arguing before the incident occurred and asked, “What’s going on here?” A gentlemen on the video said that Gugino told him that he was there “for fun.” Being upset at that comment, he said to Joe, “There is nothing fun about this. He’s looking to get punched in the face.” You can see the video here.

Joe also stated his opinion about Gugino to his social media claiming, “The man was looking for attention and was laughing saying ‘I am here for the show’ he was an asshole.” 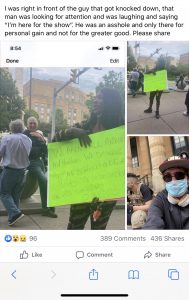 Erie County District Attorney John Flynn made an announcement this morning at a press conference, “Thursday night we had two of our police officers cross a line. They were charged and arrested this morning… assault in the second degree. This particular assault charge is a felony. I am not choosing sides, I prosecuted 49 protesters. I am on justices’ side.”

Flynn confirmed that there is a subsection in the state of NY law that says, “if the victim is 65 years or older and the perpetrator is 10 years younger, that makes it a felony.”

New York Governor, Andrew Cuomo stated this morning at a press conference, “Police have to do their jobs but they don’t have the right to abuse, to hurt, to use unnecessary force. Those that do are going to be held accountable.”

Pictures of Torgalski’s personal information including his home address and family members are being posted to social media. Some are calling to have the whole team fired on social media stating comments like, “all 59 should be fired!” while others think Gugino should be held accountable for violating the law as well.

Reports say that both officers plead not guilty and were released on their own recognizance (a written promise to appear back in court). They are due back for felony hearings July 20.