UNITED STATES−On January 19, Thomas Edward Caldwell, 65, of Clarke County, Virginia was arrested with conspiracy charges for his part in planning, coordinating, and participating in the January 6 attack on the U.S. Capitol building. Authorities indicate the  riot on the U.S. Capitol was a planned attack.

According to reports, Caldwell held a leadership role in the far-right militia group, Oath keepers. He along with several others were named in a complaint filed against them.

According to the U.S. Department of Justice, Caldwell was charged with conspiracy to commit an offense, obstruction of an official proceeding, knowingly entering or remaining in any restricted building or grounds without lawful authority, and violent entry or disorderly conduct.

Court documents indicate that Caldwell led a group of 8-10 men including some, self-styled militia members that were into custody.

The other members of Oath Keepers charged include a woman by the name of Jessica Watkins, 38, of Champaign County, Ohio. According to the criminal complaint, Watkins referred to herself on her Parler account as the C.O. [Commanding Officer] of the Ohio State Militia.

According to the 15-page affidavit, FBI investigators are looking into communications between Caldwell and known and unknown members of Oath Keepers. Others have been arrested in connection to the riot including members with ties to the Proud Boys and Three Percenters.

Donovan Ray Crowl was charged with knowingly entering a restricted building or grounds, violent entry or disorderly conduct and obstruction of an official proceeding.

CAPITOL RIOT ARREST UPDATE:
*Nolan Bernard Cooke of Savoy, TX, has been arrested on federal charges.
*FBI says videos show him interfering with law-enforcement.
*Girlfriend posted: “I
wouldn’t want anyone other than you with me to take on the revolution.”https://t.co/AwHdzoSLXX pic.twitter.com/CdUrEOGKcM

Nolan Cooke, was listed on a social media site, “Faces of Sedition.” One commenter wrote: “He will not like Thursday in prison.”

Robert Gieswein, 24, of Woodland Park, Colorado may have a private paramilitary training group. 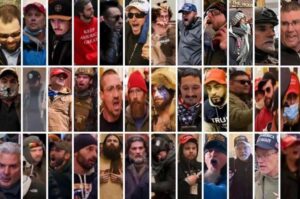 A federal judge blocked the release of Eric Munchel of Nashville, Tennessee. Munchel had plastic handcuffs during the Capitol riots. He is charged with violent entry and disorderly conduct on Capitol grounds, conspiracy, and civil disorder. He faces up to 20 years of prison time if convicted.

Court records indicate that an FBI search of Munchel’s home found tactical gear, five pairs of plastic handcuffs, multiple weapons, hundreds of rounds of ammunition, and a drum-style magazine. He turned himself into authorities and has been in federal custody since January 10.