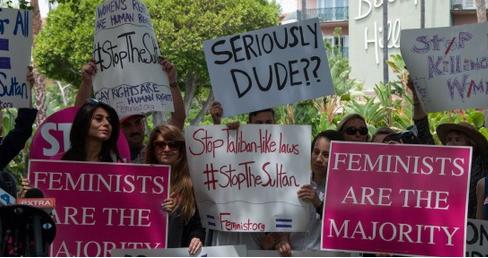 BEVERLY HILLS-On Monday, April 21, protestors began boycotting the Hotel Bel Air and Beverly Hills Hotel and other Dorchester Collection luxury hotels for the Sultan of Brunei, Hassan al-Bolkiah Mu’izzaddin Waddaulah, the owner of the hotels’ adulterer and homosexual death penalty on the civilians of Brunei.

Protestors from Dump BHH, a coalition created to protest the Sultan of Brunei’s ruling, took to the front of The Beverly Hills Hotel holding signs reading, “This hotel is owned by homophobes.” Those protesting with Dump BHH should ‘stand up for love’ by boycotting the Dorchester Collection Hotels, according to their website, www.dumpbhh.org.

Dump BHH is “a growing coalition of fashion and entertainment-community leaders, LGBT and workers’ rights groups boycotting Dorchester Collection hotels because they are owned by the Sultan of Brunei. Brunei’s new criminal code makes being gay punishable by stoning to death. [They] demand that Brunei legalize homosexuality or sell the prized hotels.”

Different celebrities have taken to social media outlets to express their outrage with the Sultan of Brunei’s ruling. Television personality, Sharon Osbourne took to various social media outlets, reaching out to fans on Twitter and Facebook to encourage them to boycott the controversial ruling. Osbourne also spoke about the issue on her talk show “The Talk.”

British actor and writer, Stephen Fry also took to Twitter and telling his followers ‘not that you were necessarily going to stay there, but time to boycott the Dorchester Group – Send them a message.” He managed to cancel his stay ‘in the nick of time’ at Coworth Park, a branch of the DC Luxury Hotels located in Ascot, England. Sir Richard Charles Nicholas Branson, the founder of Virgin Group, which is responsible for Virgin Mobile, Virgin Music Virgin Radio and Virgin Media announced that on Twitter that, “No Virgin employee, nor our family, will stay at Dorchester Hotels until the Sultan abides by basic human rights.”

The law has been criticized for being homophobic, but it also dealt with violent implications for women. The Feminist Majority Blog provided a quote from Mavis Leno, a Board member of the Feminist Majority Foundation, on their website on the Sultan’s law, saying “kill-a-gay laws, or laws that allow the flogging of women for abortion, violate international law and have no place in civilized society.”

According to a press release from Therese Kosterman, Public Information Officer for the city of Beverly Hills, the City Council met on Wednesday, May 7 and unanimously passed a resolution condemning the government of Brunei for a string of laws that impose very harsh penalties, including death by stoning for homosexuality and adultery. The Beverly Hills City Council is asking for the Brunei government owners to sell the hotel and other properties they own in Beverly Hills.

“I brought this resolution forward because of my own and the Beverly Hills community’s fierce reaction to the horrific laws and punishments in Brunei,” said Mayor Lili Bosse. “These laws are shocking, inhumane and must be met with a strong statement of support for human rights of the people of Brunei.”

“It is extremely important that we separate out the hotel from the ownership,” said Mayor Bosse. For more than a century, the City has had a strong and positive partnership with the Beverly Hills Hotel. I am not calling for a City-sanctioned boycott. I feel that each individual and group should make their own decision and I personally will not be attending any events at the hotel until this issue is resolved.”

During the meeting more than 100 hotel employees, and various speakers spoke about the extreme laws in Brunei and discussed their concerns about the effect it has on the famed Beverly Hills Hotel and its workers.

The East Asian country recently adopted an Islamic criminal law, which aims to punish offenses like homosexuality and adultery with flogging, amputation and death by stoning. Much of the world has been quick to condemn the country for its discriminatory practices, and the City Council decided to do its part.

“I do think we sincerely need to lobby the United States government for sanctions [against Brunei],” said Councilman John Mirisch at the council meeting. “This is a matter of human rights.”

On May 6, the advocacy group Human Rights Campaign called on the Beverly Hills Hotel and Hotel Bel-Air to cease promoting “specialized services to LGBT couples seeking to have wedding ceremonies in the Los Angeles Area,” according to a statement. The group had condemned the government of Brunei on May 2, and it was in attendance of a large protest on May 6 outside the Beverly Hills Hotel.

“The Sultan is offering free strawberries to LGBT couples in L.A. and death by stoning to those in Brunei,” said Chad Griffin, the group’s President. “This is the height of hypocrisy, and we must ensure that profits from LGBT weddings in the U.S. Stop going to a regime that could soon start executing its LGBT citizens.”

Eleanor Smeal, president of the Feminist Majority Blog was also quoted in the release asking “The United Nations [to] condemn the government of Brunei’s plans and explore additional options, including sanctions, if Brunei fails to rescind this decree.”

“The new penal code is set to be implemented in three phases over three years. The first phase, beginning May 1, 2014, will include fines and prison sentences. The second phase includes corporal punishment such as amputations and flogging women who have abortions. The stoning to death of gay men and lesbians is slated for the third phase,” states the release.

The ruling has been postponed due to the amount of protests taking place. The hotels being boycotted included the Beverly Hills Hotel and the Hotel Bel-Air in Los Angeles, California; 45 Park Lane and The Dorchester in London, England; the Coworth Park in Ascot, England; Le Meurice and the Hotel Plaza Athenee in Paris, France; Le Richemond in Geneva, Switzerland; the Hotel Principe di Savoia in Milan, Italy; and the Hotel Eden in Rome, Italy.