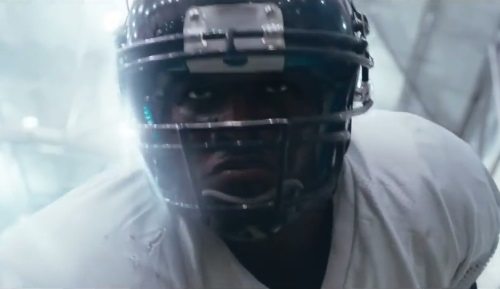 SEATTLE—Derrick Coleman, a deaf NFL player, recently inspired the masses with his incredible underdog story, but the crowd he’s inspired the most are the hard of hearing youth. Coleman, who has been deaf since the age of 3, defied his doubters when he became a full-back for the Seattle Seahawks despite the fears that his deafness would interfere with his ability to play football.

In an interview with King 5 News in Tacoma, Washington, Coleman met Aiden Campbell, a young hearing-impaired youth who felt inspired to go try out for sports since Coleman set the example of what people can achieve despite the hindrances they have. Campbell was told by his grandfather that you have to be “good of hearing” to participate in sports. Because of Coleman’s inspirational story, Campbell believes that he too can play for the Seahawks someday.

The commercial for Duracell provides an awe-inspiring look into Coleman’s life; we catch of glimpse of the teasing he went through from classmates while growing up, friends and families’ failure to communicate efficiently, as well as the obvious doubters that believed the deaf and/or hard of hearing have no place in sports. Coleman cleverly says in the ad that he never listened to the discouragement because “[he’s] been deaf since he was three.”

According to the Seahawks website, “Coleman signed as an undrafted rookie free agent out of UCLA by the Minnesota Vikings on April 28 and played in three pre-season games, rushing 19 times for 50 yards before being released during training camp.” Coleman’s coaches at UCLA report that Coleman’s hearing aids have never been a problem.