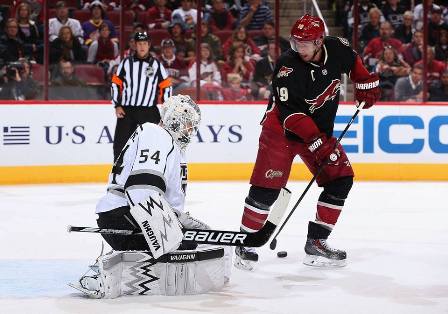 PHOENIX—The Coyotes took their revenge the way it is best served…on ice. A three unanswered run late in the second and third periods switched to a strong defense to knock out the Kings 3-1 on October 29.

For goaltender Mike Smith and LA’s Ben Scrivens it was important not to let up on the defense after allowing 11 combined goals in their last meeting five days ago. Both teams took the advice to heart, but it didn’t stop them from racking up in other ways. Phoenix and LA traded penalty, after penalty where the game turned physical with Justin Williams and Rob Klinkhammer took roughing penalties a peace for the blood to boil.

While combining for 11 minor penalties, the Coyotes controlled the puck play with Oliver Ekman-Larsson scoring a goal that was negated. The video evidence showed that Antonie Vermette made contact in the crease knocking down Drew Doughty and Scrivens in the process. It didn’t douse the fire that the Coyotes held, out shooting Los Angeles 17-9 for 20 minutes.

Three minutes into the second, Kings forward Daniel Carcillo and Coyotes center Kyle Chipchura threw down the gloves and exchanged punches leading to fighting majors for both. The scoring came late for Phoenix as Derek Morris sent a drive near the far end to go up 1-0 where the puck slowly trickled past the goal line to give Morris his third on the year.  Ekman-Larsson made his credit count on the assist at 19:54 with a slapshot from Captain Shane Doan that gave him his third and a 2-0 lead to end the period.

The Kings spent the third period controlling the puck, but in the first five minutes, the Coyotes scratched out their third of the night on a David Moss shot that hit the skate of Scrivens and went off the skate of Chipchura putting the game out of LA’s reach.  Although the Kings put a goal on the board from Jarret Stoll with a stick side drive the Coyotes and Smith held their ground on the night evening the series with a game apiece.

Smith’s 41 saves gave him his seventh victory with a .976 save percentage while Scrivens notched his first loss stopping 30 of 33 on net. He will have three meetings next year to avenge his first loss, but a back to back game lineup with San Jose coming to the Staples Center Wednesday will determine if a short stint could keep the Kings warmed up.