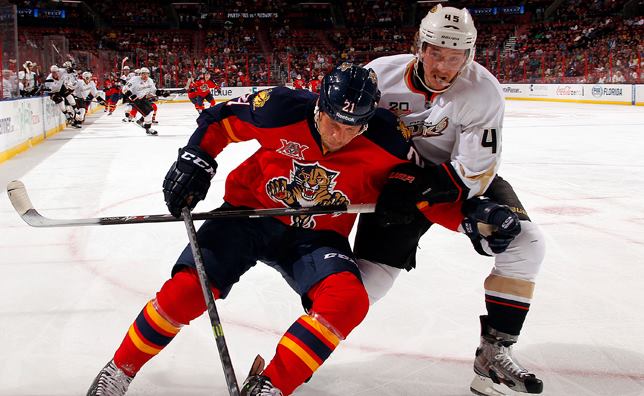 SUNSHINE, FL— Anaheim’s first period gain led to an unanswered loss. The Florida Panthers made their comeback in the second half of regulation to win 3-2 over the Ducks on Tuesday, November 12. It came at the best moment, shattering a nine game losing streak dating back to October 22.

The Panthers didn’t look to break their long skid, as the Ducks scored 40 seconds into the first period giving Andrew Cogliano his sixth on a wrist shot after winning possession of the puck. Anaheim traded time on offense with the Panthers, but not enough to give them a scoring chance to tie. Instead, the Ducks increased the goal margin on a 2-0 lead by Swedish rookie, Hampus Lindholm who scored his first NHL goal.

The Panthers had enough of trailing in the game and responded in the late part of the second period. The first came from Center Shawn Matthias who notched his second of the season after his team set up a beautiful pass play in the Ducks zone, with a drive from the far end of Ducks goalie Frederik Andersen. Scottie Upshall tied the game 1:10 later on a flying puck that curved down into the net. Given the Panthers scored twice, they were still outshot by Anaheim in the second. They did hold the Ducks on the fore check and the improvement of Tim Thomas in net for his team.

The Panthers success in the second period rolled into the third, at 4:29 Boyes scored the game winner that held the Ducks and their backs against the wall. His sixth goal of the season gave the Panthers their second win in regulation at home since October 11. Thomas won his third win in eight starts, making 32 saves and a .941 save percentage. Andersen took his first loss of the season with 22 saves maintaining a .943 save percentage.

The Ducks continue towards three games on the road through November 18. The Panthers hope to fly up in the standings with road games against Pacific and Central Division teams in the Western Conference.