MALIBU—Two drivers were killed following a head-on collision that occurred on Pacific Coast Highway on Friday, August 3. Officials from the Los Angeles County Sheriff’s Department are investigating what may have caused the accident that transpired after 12 p.m.

A white minivan traveling eastbound on PCH crashed into the barrier colliding into a red truck driving westbound, where both drivers were killed upon impact. The drivers have been identified as two males, the names of the victim’s have not been disclosed to the public. The accident took place near Trancas Canyon and Pacific Coast Highway. One passenger riding in one of the vehicles suffered injuries, but is listed in stable condition.

According to reports, the crash resulted in a wheel coming off the pickup truck and striking a cyclist along the road. Paramedics arrived on the scene and took the cyclist to a nearby hospital to undergo treatment.

All lanes headed eastbound on PCH were closed, while one lane remained open for travel headed westbound after the accident. The LASD took to Twitter to inform the public on the collision and to seek an alternate route if heading in those directions. PCH remained closed until 6 p.m. on Friday when officials reopened all lanes. 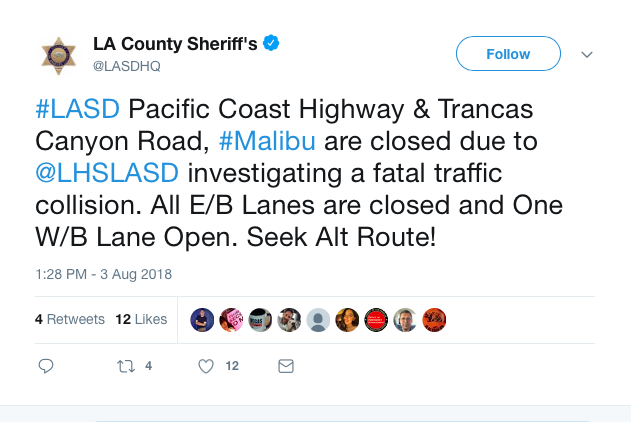 An exact cause of the collision has not been disclosed. Officials are still investigating the case, but according to reports speed and alcohol may have been a factor.

The Abbey To Require Proof Of Vaccination For Entry