Romero, who is a Professor and educator took out a television advertisement endorsing Elder, citing the need for school choice after Governor Newsom closed public schools during the pandemic, “while sending his kids to private school. Yes, I’m a democrat, but the recall of Newsom is not about a political party.”

Romero has been advocate for improving education of California’s children for years. According to the Elect Elder campaign website, “Larry Elder is a product of California’s worst school system in South Central Los Angeles. He knows and has lived through the challenges.”

California4Trump issued a flyer via electelder.com that addressing his qualifications for Governor.

While Elder appears to be the Republican choice of the 14 candidates running, there are over two dozen names besides CAGOP, California4Trump, and Gloria Romero who are endorsing Elder. A Democratic group, Jewish Republican Alliance, Asians for Elder, and actor and director Clint Eastwood are endorsing Elder. 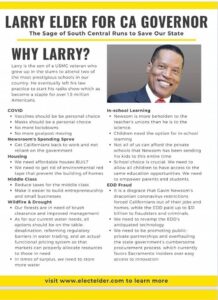 “Larry Elder is the black face of white supremacy. You’ve been warned,” Erika D. Smith wrote in the L.A Times.

Some Elder fans are holding signs that say, “Respect Your Elder,” while others are campaigning against Elder becoming Governor. TMZ reports signing being stolen from residents homes in Pacific Palisades who are in support of Newsom including actor Billy Crystal.