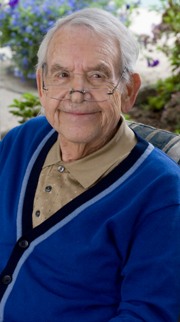 HOLLYWOOD—Actor Tom Bosley died in his home in Palm Springs on Tuesday, October 19, after battling lung cancer. He was 84.

Bosley enjoyed an extraordinary career that spanned 62 years and included successes in theater, film and television. He is perhaps best known for his role as Mr. Cunningham on the ABC TV series, “Happy Days,” for which he received two Emmy-nominations over 12 years. That series also starred Marianne Ross, Henry Winkler and Ron Howard. Additional career highlights include a Tony Award for his performance in the 1959 Broadway hit “Fiorello!” He made his motion picture debut in “Love With A Proper Stranger,” starring Natalie Wood and Steve McQueen.

Over the past six decades Bosley enjoyed a distinguished career in television that included a co-starring role with Angela Lansbury in the CBS hit series, “Murder She Wrote,” followed by his own series, “The Father Dowling Mysteries” which also aired on CBS. He returned to Broadway in 1994 starring as Belle’s father in “Beauty and the Beast.”

Over the actor’s long and distinguished career, one man was a guiding force in the actor’s creative decisions. Famed Hollywood manager and former agent Burton Budd Moss spoke exclusively with Canyon News to talk about Mr. Bosley’s career. “We were friends and I saw him just a week ago here in Beverly Hills. I knew it would not be long for him, but he still seemed to have his strong personality,” said Moss. “The show ”˜Father Dowling Mysteries’ was something that came out of a trip Tom and I took to Rome. We were talking with a producer who was trying to get the rights to a book with a similar title from an author in the U.K., so he finally decided to make it Father Dowling instead and three seasons later, the show was still a hit. That all came from a great trip I took with a dear friend.”

“Tom called me one day, telling me that he’d read the L.A. Times and had seen my name along with another agent’s at the time. He spoke with that agent, but found out that he was representing a client who would possibly conflict with Bosley’s-type in future roles and so, he called me and told me that I was chosen by default. I didn’t mind. I helped him land ”˜Happy Days,’ and a few bumpy rides between us over the past four decades, I am glad to say we ended as friends. I’m sorry for the loss of Tom, but he’s in a better place, not suffering anymore,” concluded Moss.