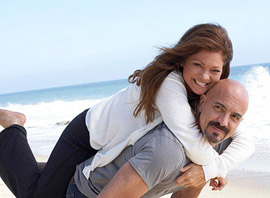 MALIBU—Valerie Bertinelli, best known for her work in the TV series “One Day at a Time” and “Touched by an Angel,” married Tom Vitale, her longtime boyfriend, at her Malibu home on New Year’s Day. She is currently starring in “Hot in Cleveland,” a TV Land sitcom.

Vitale, 49, is a financial planner. The two had been dating for seven years. The event was attended by over 100 people, including rocker Eddie Van Halen, to whom she was married for 25 years, from 1981 to 2006. Their 19-year-old son, Wolfgang, was also present. She attended Van Halen’s own wedding to stunt-woman Janie Liszewski in 2009.

Bertinelli, 50, has also made commercial appearances for Jenny Craig, touting her own weight loss success.

Her television career started in the mid-1970s with a single appearance on “Apple’s Way.” Other TV shows she has worked on include “The Hardy Boys,” “The Rachael Ray Show” and “Boston Legal.” She has also been in a few films, such as “Saved!” and “True Confessions of a Hollywood Starlet.”