LOS ANGELES−Dr. Ben Carson, Secretary of Housing and Urban Development under the Trump administration announced efforts to join forces with Los Angeles Mayor Eric Garcetti in the formation of a joint task force to combat the growing homeless crisis.

The group is working together to identify and remove red tape and regulations interfering with swift action to get the homeless off the streets and into housing units.

According to the HUD website, Dr. Carson spent Valentines Day visiting the Carmelitos Public Housing Development in Los Angeles. He announced that $20 million will be awarded to nine Public Housing Agencies (PHA’s) to help housing families to increase their earned income and become more self-sufficient. Funds will be awarded through HUD’s Jobs Plus programs. The programs support work readiness and connect public housing families with employment opportunities, education, and financial services.

Many of the grant recipients live in what is referred to as Opportunity Zones, which is a program that was created in the 2017 Tax Cuts and Jobs Act. Opportunity Zones aim to stimulate a long-term investment in low-income communities. 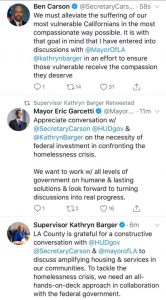 According to a chart that shows all of the recipients of the Jobs Plus grants awarded, the Los Angeles County Housing Authority is reported to be the recipient of $1,854,077 and names the city of Alhambra.

“HUD is committed to empowering public housing residents with new educational and economic tools to improve self-sufficiency,” said Carson. “HUD is proud to work with our local partners to help more residents find employment so that they can reach their full potential and become role models to future generations.”

On December 19, 2019, President Trump encouraged governors who could not handle their homeless situations to just ask.