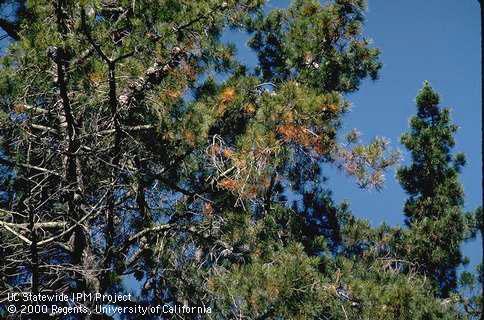 HOLLYWOOD—I was surprised when the second neighbor in the span of two weeks told me that they had planted their Christmas trees in their yards years ago and pointed to trees that were 25 to 60 feet tall.  What made me notice the pine trees in the first place was the number of local trees that are dead, dying or have been cut down.  Why?  Is it that our Mediterranean climate can’t support pine trees?  Nope the cypress seem to be doing fine. So I asked a MRCA Ranger.  His answer: “bark beetles.”

Those must be some feisty beetles to take down tree after tree. It turns out that the beetles are the end of the story, not the beginning. The death knell for a lot of our pine trees begins with air pollution. Apparently the bad air floats up from the valley floor and deposits nitrates on the tree leaves and the soil.  That weakens the trees, making them susceptible to attack by the bark beetles. “With a strong immune system they can fight off disease, [but] urban trees have the worst time in the world because they [deal with] concrete and air pollution.  With years of drought, precarious water tables, trees [are] being planted so close together fighting for water, we’ve noticed it to be a problem,” said the ranger.

The tree hugger in me is horrified.  In asking around, I was told that our bark beetles have no natural predators.  I mentioned this to a Park Ranger in Sequoia and he told me that the only bark beetle predator was the wood pecker, but because wood peckers are so territorial, they can never effectively control the population explosion of the bark beetles.

This does not bode well for our local pine trees. I did some research and learned that there are some chemicals that can be used to control the bark beetles—lindane, chlorpyrifos and fenitrothion. The first one can be purchased by private parties. The last two have to be applied by professionals. Apparently the application needs to be during mating season.All of these make my flesh crawl thinking of the possible repercussions of using chemicals to solve nature’s problem. In Sweden, they releasemyrbagge beetles, which are attracted to the specific pheromones from bark beetles.  These bad boys rip the legs off the bark beetles to make sure they can’t get away. Holy Cow!

After such gruesome information, I was glad to be able to lighten up a bit.  It turns out that some scientists, probably evolving from the wood pecker theory, tried to control bark beetles with noise. At first, the researchers blared Queen and Guns N’ Roses. Then they played snippets of radio talk host Rush Limbaugh backwards. I have no idea why Rush would be more annoying backwards. The beetles were undeterred, but when exposed to scrambled recordings of their own mating calls the beetles froze, fled and/or attacked one another violently. The project is called “Beetle Mania.”  Someone has a sense of humor.

You can get free trees to replace the ones that have died.  Log onto:MillionTreesLA.org, or call 3-1-1 and tell them you want to participate in the Green LA Initiative through the DWP. I’m going to buy a Christmas tree this year and plant it.