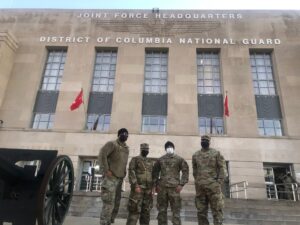 According to a press release from the Department of Defense, close to 2,300 National Guardsman will remain in the nations’ Capitol to continue their mission.

The DOD reports that a 50 percent reduction of the number of troops in D.C. since January 7.

General Austin’s approval will grant military support to the Nations Capitol for an additional 10 weeks.

“During this extended period, DOD officials will work with the U.S. Capitol Police to incrementally reduce the National Guard footprint as conditions allow. We thank the National Guard for its support throughout this mission, as well as for its significant efforts across the nation in combatting the COVID-19 pandemic.”

“I want to thank the — former general…the guy who runs that outfit over there. I want to make sure we thank the Secretary.”

“I want to thank the — former general…the guy who runs that outfit over there. I want to make sure we thank the Secretary.”pic.twitter.com/Re6a4H4Nfr

According to the House Judiciary GOP, troops would have been deployed to D.C. sooner, had the Speaker of the House honored multiple requests by Capitol Police sooner.

GOP members sent Nancy Pelosi a detailed letter demanding an explanation as to why she ignored requests from top security officials to call in the National Guard prior to the January 6, Capitol riots.

House Republicans and members of the US Senate suggest Pelosi may be held responsible for the delayed response that would have led to the activation of the U.S. National Guard.