The rally had initially been canceled. In a memo, the President’s physician, Sean P. Conley, stated that President Trump tested negative for COVID-19 for consecutive days. 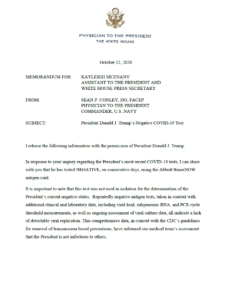 “I feel so powerful. I’ll walk in there [ into the audience] and kiss everyone. I’ll kiss the guys. I’ll kiss the beautiful women,” Trump said jokingly.

“When you’re the President, you can’t lock yourself in the basement. You got to get out.”

A crowd of thousands gathered holding signs in support of the President and wearing T-shirts that said, “Blacks for Trump,” “Women for Trump,” “Latinos for Trump.” At one-point, Trump looked up, and said, “What’s that?” The crowd was overflowing into the nearby hangars. President Trump spoke of a new recent admission by the World Health Organization (WHO). 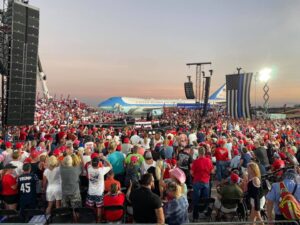 In a recent interview, Dr. Nabarro, COVID envoy specialist for the WHO told Andrew Neil in a Spectator Interview, “We really do appeal to all world leaders: Stop using lockdown as your primary control method.”

This comes several months after the same organization recommended lockdowns to halt the spread of the virus.
President Trump told a cheering crowd that he was right.

President Trump said that the upcoming presidential election on November 3, “Is the most important in American History.”