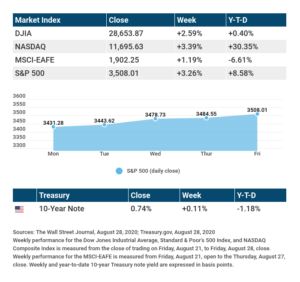 “I’d like to begin by saying we’ve just closed out another month of the stock market. We had the best stock market−Dow−in 36 years. That’s very impressive. So, people are very happy with their 401K’s,” said President Trump said.

“Last week, we announced a breakthrough in testing that will allow us to have over 150 million rapid-point test care tests [available].” He indicated that the new rapid tests provide results in less than 15 minutes.

“This evening, I am pleased to announce that the AstraZeneca vaccine has reached phase three clinical trials,” said President Trump. “This is a process that would have taken, in some cases, years, and we did it in a matter of months. Thanks to the efforts of Operation Warp Speed, we remain on track to deliver a vaccine very rapidly, in record time.”

He addressed ongoing issues of riots in Portland Oregon noting, “We could solve that problem in approximately one hour, but the mayor refuses, perhaps for political reasons. I don’t know why it’s good for him to have a city that’s falling apart and that’s under siege now for 94 days. But, really, it’s been under siege for years, if you know Portland.” 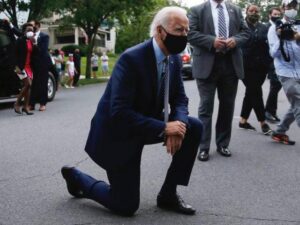 “This wave of violence and destruction that we’ve seen in recent weeks and months has occurred in cities exclusively controlled and dominated by ‘the Biden—the Joe Biden’ party.”

“The [Media] keep using the term−it’s so nice, ‘peaceful protest.’ And behind the reporter, the cities are burning.”

He noted 13 members of Biden’s campaign staff donated to a cause to bail the rioters and looters out of jail. President Trump indicated that the Democrats are attempting to “put it on the backs of the police. I see it. There is just a war on law enforcement in this country.”

“The Republicans, we don’t have problems. You take a look at our cities: our cities are doing very well. They are safe. They’re secure,” President Trump concluded.