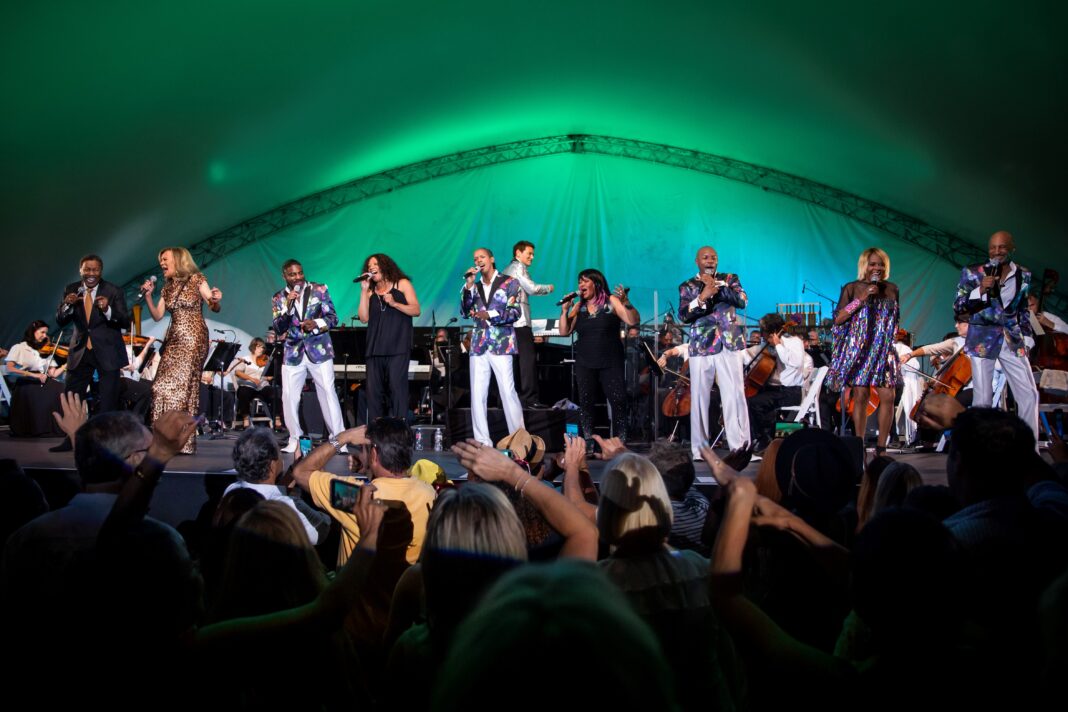 HOLLYWOOD—I ventured out to a social event with my husband for the first time in nearly two years. Due to the pandemic lockdown, following the cold of winter, the last time we had gone to any venue was indeed in the summer of 2019, and one of the last things we did was attend a Pasadena Pops outdoor concert. It seemed fitting that we pick up where we left off.

As Lora Unger, the CEO/spokesperson of the Pops, introduced the evening, she began with an ebullient, “WELCOME HOME!” For the Pasadena Pops, “Road to Motown,” led by Michael Feinstein, they had their biggest crowd ever, a sold-out evening. One hundred percent of their subscribing audience had agreed to roll over their season tickets until this reopening, allowing the Pops to have the cushion to survive for the duration of lockdown. That is a loyal crowd.

The evening began with a hearty, stirring rendition of the National Anthem, flags waving in time with the orchestra, led by the young student, Cole Brown, mentored through the LA Phil’s Nancy and Barry Sanders Composer Fellowship Program for high school students. The audience stood and sang along as Brown deftly waved his arms. Life, and live music, are back.

Michael Feinstein then entered the stage and warmly embraced the audience, as always. Jokes were made about the fears of playing live again, after being locked up for so long. Are the musicians out of practice? Are the sound technicians still able to balance accordingly? Will the peacocks still squawk on cue? Feinstein was a little more reserved than usual, less chatty with this show, giving merely a taste of Motown history at the start, and a few of the performers added more tidbits, but it was a night mostly for the music: a rapid-fire lineup of the songs, mostly shorter renditions, allowing time for a gamut of the Motown repertoire, and then some…some disco, some Beatles, and the like.

First, Feinstein introduced the still-sexy-at-77 Marilyn McCoo, and still-handsome-at-83 Billy Davis, Jr. The still-in-love-after-50-years couple danced and cooed together, hitting all the right notes, while supported by two great backup singers, Cynthia Bass and Cydney Davis. They opened and ended with their signature songs from their days as The 5th Dimension, “Up–Up and Away” and “Aquarius/Let the Sunshine In,” and gave a tribute to the late, great Mary Wilson from the Supremes (who was originally booked to do the show, before her untimely death). “How Sweet It Is” had great guitar and sax solos, giving the Pops orchestra a focused moment. The crowd began to warm up as the sun set and the stars came out. Or the star, I should say.

Thelma Houston took over next, and she is a dynamo at 75. She came bounding on to the stage with high-stepping sparkly sneakers, kicking and bouncing, to a medley which included, appropriately, “Dancing in the Streets.” Thelma was dressed in a capri pantsuit of many colors, and splashy, flashy sequins. As she said, “There’s no more glitter in the stores, because I put it all on for YOU!” She was making up for lost time, sharing the energy she’d stored up in hibernation! With Tina Turner-esque blond hair, and style, she rocked it out, with another montage and nod to Mary Wilson, whose estate had given Houston the rights to sing Wilson’s “Reflections” and “Someday We’ll Be Together.” Houston of course knocked her iconic “Don’t Leave Me This Way” out of the park. Or out of the Arboretum, as it was. She at one point was in verbal and costume-plumage competition with the local peacocks, bantering back and forth with them, as they joined in on cue.

The night was closed with the talents of the tenor quartet, “Spectrum.” Having been spoiled by the amazing “Ain’t Too Proud: The Life and Times of The Temptations” Broadway tour performers at the Ahmanson, I had my doubts if Spectrum could do as well, but they were wonderful. Tyriq Johnson, E.C. Adams, Cushney Roberts, and Pierre Jovan (2nd Tenor/Baritone), dressed in matching classy white suits, nimbly moved and grooved through the second half, hitting all the classic Motown tunes, including the aforementioned “Ain’t Too Proud to Beg,” and a Jackson 5 Medley. The night was closed with all performers together on stage, all dressed to the nines in more colorful sparkle and sequins, singing a rousing finale, and getting the audience on their feet.

Some changes were put into place at the venue, but that did not impede enjoyment: everyone had to bring, and SHOW, proof of second vaccination against COVID at least two weeks prior. More Porta Potties were brought in, which was a definite plus. Parking was a bit different, and difficult, circumstantially, but an apology was sent out afterwards for the snafus that apparently had arisen, though we hadn’t faced them, luckily. The packed house amped up the level of excitement, but of course, brought with it more irritation. Maybe we were more sensitive, after having not been with the mass public for so long, but, yes, they talked too much during the music, crinkled water bottles inappropriately, had irritating lights/cellphones that distracted sightlines, wore overbearing perfume/cologne, and beat time on the shared tables, rather than just simply clapping along.

On the good side, some light conversation ensued, some pleasantries, the positive kind of social interaction, along with some dancing and swaying and jubilation. It was good to be back HOME with the music and the Pasadena peeps. Who knows what is safe and healthy to do these days, but it seems a pretty safe bet that inching back to socialization, through the arts, in an outdoor venue during the summer, is about the safest way to ease back into life as we used to know it. And the Pasadena Pops at the LA County Arboretum, in Arcadia, is warm and welcoming. The geese and peacocks were there, the trees were swaying, the sun shone brightly, until the stars took over, and for a time, all was right with the world.