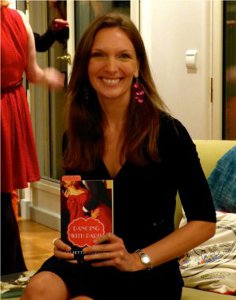 HOLLYWOOD—Chances are you probably won’t get to to read all the books in the coming year because those books have been displaced by even more pressing “must reads.” A definite must-read is Juliette Sobanet’s, “Sleeping with Paris.” This book is definitely worth reading, a great tome that leaves you with a great feeling. Here are some of the questions we asked the author Juliette Sobanet in this exclusive interview:

Q: What inspired you to write the novel, “Sleeping with Paris.”

A: I first fell in love with Paris as a teenager while on a high school trip to Europe. I adored the quaint cobblestone streets, the charming sidewalk cafÃ©, the buttery pastries, and the gorgeous language. I immediately knew that I wanted to become fluent in French so that I could teach it one day..and also so I would have an excuse to travel back to France! Fast forward ten years, and I’d moved to Paris to complete my Master’s degree in French. It was during this incredible year abroad that the idea for “Sleeping with Paris” began taking shape. After spending my last few weeks in Paris writing my master’s thesis in French. I felt confident that I had it in me to write a full-length novel, and there was no doubt in my mind that my main character would be jetting off to Paris. As soon as I jetted home to the States and a severe case of France withdrawal set in, I began writing Charlotte’s story of attempting to avoid love in the City of Love.

Q: The protagonist, Charlotte Summers, in your book must have been so heartbroken. Do you feel that most women in that same situation can empathize with the character and why?

A: Yes, I think any woman who has ever been betrayed by someone she loves can identify with Charlotte’s feelings.

Q: Any plans on future novels” If so, would they be works of fiction?

Q: Do you have a favorite author?

A: I have many favorites, but the one that always stands out for me is Kyra Davis. She’s the author pf the Sophie Katz murder mystery series ( “Sex, Murder and a Double Latte” is the first book in the series), and her books are fantastic.

Q: Any plans on bringing your novel to the big screen?

A: That’s always a plan in my mind, but now to find the director and film crew to make it happen. Any takers? Seriously though, I can’t imagine anything more incredible than seeing one of my books become a movie.

Q: Would you ever consider writing a screenplay?

A: Absolutely! I would love to adapt one or all of my novels into screenplays at some point. I would need to learn more about the screenwriting process of course, but that is definitely a goal I’d be excited to accomplish one day.

Q: You love to travel, besides Paris, what is your favorite happy place?

A: My favorite city in the world is Lyon. It’s a gorgeous town about two hours south of Paris by train. In fact, Charlotte from “Sleeping with Paris” and Chloe from “Kissed in Paris” both make trips to Lyon. I can’t seem to keep them (or myself) away for too long!

Juliette Sobanet’s “Sleeping with Paris” is now available and “Kissed in Paris,” will soon be released on Amazon and Barnes & Noble.

Rose can be reached at Rose.Quintiliano@Canyon-News.com