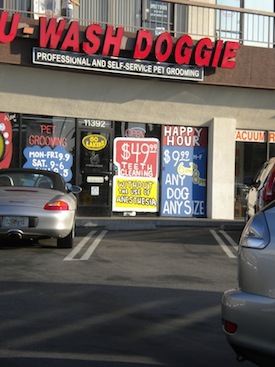 STUDIO CITY—The owners of businesses at a strip mall in Studio City have been ordered to remove signs that have been considered unattractive to viewers; however, the owners believe that removing the signs may hurt their businesses.

The owners at the strip mall on the 11000 block of Ventura Boulevard reportedly received a notice from the city ordering them to remove the signs after the Los Angeles Department of Building and Safety received an anonymous complaint that the signs were bothersome to those who felt that they were in violation of the city’s initial plan, which promises that the area isn’t marred by unnecessary signage, according to city officials.

“We have been ordered by the city to comply with orders to remove the signs by August 17,” Claudia Flores, of Video West, one of the businesses at the strip mall location, told Canyon News.  “I’m not really clear on whether they need us to acquire permits for the signage or if they just want us to remove the signs altogether, but I do know that the signs are considered an annoyance because they go against a 25-year ordinance that requires that distracting signs must not be placed on businesses on Ventura Boulevard.  From what I understand someone in the area sent a complaint about the signs to the city.  But everyone else on Ventura Boulevard does it, so I don’t know why they are only isolating this one little strip mall.”

When asked by Canyon News if removing the signs could possibly hurt their businesses, Flores stated, “Definitely, because we rely on people knowing of our services.  It’s usually through word-of-mouth and people driving by to see our posters, including movie posters, that people will know about us.  We just received a movie poster for ‘Bounty Hunter’ this week.”

Flores added that she wanted to be in compliance with the laws ordered by the city, but was still unclear on why the signs must be removed or what type of signage was acceptable.  “I’ve called them [the Los Angeles City Council] a few times but I haven’t received any responses yet.  I don’t know if they just receive a lot of calls or are just busy, but it’s difficult to try to comply with the order when I am unsure what is required.  I don’t know if we need to just adjust the signs to meet the laws, to make them neat and professionally done so that they don’t look tacky.  But removing them completely could hurt our businesses, because these signs are 25 percent of our business.”

Francisco Ganero, of the U Wash Doggie business at the small strip mall, told Canyon News that he is also frustrated about the order.

“Basically we are just being ordered by the City to take the signs down,” Ganero confirmed to Canyon News.  “I am not allowed to have more than 10 percent of signage on the window, so I was asked to remove the paintings and the art that advertises my business from my window.  In actuality, I think the signs have to be approved, but right now I think it’s just a political thing and that they [the City] are just being pains in the butts.  What they don’t understand is that with all the trouble we are experiencing with the economy, the city hurting for money and people getting laid off, what benefits us benefits them.”

Ganero stated to Canyon News that despite the hardship the new order may place on businesses, he is still willing to cooperate and comply.  “This especially hurts small owners like me who are doing business to create business,” he said.  “In the long run what hurts us hurts them, and what helps us helps them.  For those of us who are hurting for money this order is really knocking us down.  But I am still just going to lay low for now.  I am willing to follow the rules because I don’t want to get in trouble or pay any fines.  In two or three months, we’ll just have to see what happens.”