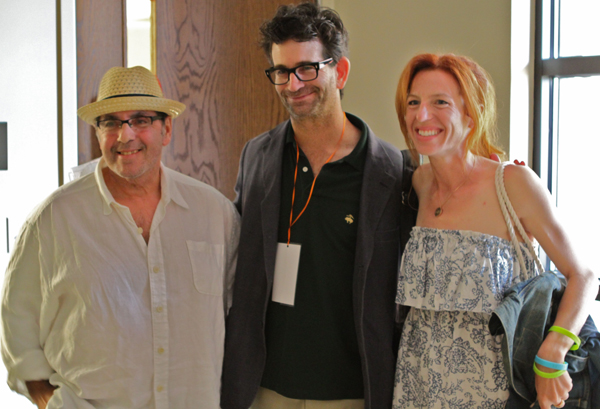 SANTA MONICA—Tanna Frederick has won over the critics with her acclaimed performances both in film and on the stage. The beautiful star currently can be seen in Henry Jaglom’s amazing play “Just 45 Minutes From Broadway” at the Edgemar Theatre in Santa Monica. Tanna also surfs on a daily basis, and over the summer completed the L.A. Marathon, receiving high marks for her performance as an athlete as well. Just last month the actress also raised funds for Project Save Our Surf in Huntington Beach.

Iowans have such a beautiful state, and they treated us like royalty. They embraced all of us with a warmth and affection none of us will soon forget. “Overnight” was shown, a film Zack Norman produced. Writer/Director Valerie Breiman did an absolutely incredible job on the film. “Nothing Special” is the title of Angela Garcia Combs’s film starring Karen Black. It was very special and thought provoking. Charlie Matthau’s “Baby-O” was also well received. Matthau is one of the most talented directors in Hollywood, and Iowa loved him. We all do. Other films that were featured included “16 to Life,” “Bedford Springs,” “I Pledge Allegiance,” “As the Corn Grows,” “Never Too Late,” “No Words” and Julie Davis brought her acclaimed comedy “Finding Bliss” to the festival. The audience was transfixed by the humor of her film, the style of writing and directing that belies the subject matter. This is a film that was recently released in NYC and L.A. and is going to DVD next month.

The film the audience was most interested in seeing was “Queen of the Lot,” which stars Noah Wyle and Iowa-native Tanna Frederick. Wyle was in Canada shooting a film for Spielberg and Dreamworks, but Frederick, ever the consummate hostess, was on hand to charm the audience both on-screen and in person. The beautiful red-haired star’s performance in “Queen of the Lot” left people in the audience breathless. Many left the screening room saying, “This is Henry Jaglom’s best work yet, and wasn’t Tanna’s performance sublime?”

The endearing star was very gracious and gave credit for her incredible performance to directors and filmmakers Henry Jaglom and Ron Vignone, as well as giving credit to her leading man Noah Wyle, as well as Christopher Rydell. The film is sensational, with standout performances by Jack Heller, Mary and Kathryn Crosby, Zack Norman, David Proval and Kelly DeSarla. I even received a few laughs for my scene opposite Tanna. Festival attendee Matt Voigts commented afterward, “Tommy, you did a lot with your short time on the screen.” I appreciated that critique. I’ve often told Henry Jaglom that I am ready for my close up.

“Queen of the Lot” is one of the best written and directed films of the year. Laughter and tears are shared by the actors on the screen and the moviegoers. Everyone enjoyed the movie and afterwards gave kudos to Tanna Frederick and Henry Jaglom, whom we spoke to 2000 miles away in Bel Air, thanks to Ron, who knows more about gadgets than “MacGyver.” Henry was back in L.A. meeting with another star on the film, director, actor Peter Bogdanovich. Praise was also heaped on Sabrina Jaglom’s mesmerizing performance in the film. Every starlet has a breakout moment in her career. This is that very time for Frederick. Her work in “Irene in Time” and the prequel to “Queen” in “Hollywood Dreams” all prepared her to carry a film filled with magnificent and talented characters and actors of the highest caliber. She is now officially a star in Hollywood.

“Queen of the Lot” will be released in theaters across the U.S. in November 2010.