UNITED STATES—The Mayor of Edinburg, Texas, Richard Molina and his wife, Dalia, were arrested and charged with voter fraud. Molina and his wife turned themselves into Texas Rangers on Thursday, April 25. Both were held in Hidalgo County Jail for less than an hour before they were bonded out by David’s Bail Bonds owned by Edinburg City Council member, David Torres. 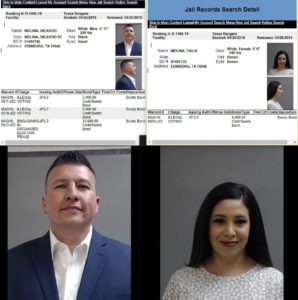 Attorney General, Ken Paxton announced on his website that the election fraud unit of his office that Molina is charged with orchestrating an illegal voting scheme in his own mayoral election. The Hidalgo County District Attorney’s office with the assistance of the Election Fraud Unit will be prosecuting both cases.

AG Paxton’s indicated that Molina and his wife had numerous voters change their address to places they did not live including apartments owned by the Molinas ”For the express purpose of voting for Molina in the November 7, 2017, Edinburg Municipal election.”

“My office is appreciative of the many witnesses who have come forward and cooperated with the investigation, explaining how they were lured by an ambitious candidate into participating in an illegal voting scheme to elect Richard Molina,” said Paxton in a statement.

A total of 18 individuals have been arrested since last year in connection with the Edinburg organized illegal voting scheme. Paxton has been diligent in prosecuting those guilty of voter fraud making the headlines three times in January 2019. One situation included a non-citizen arrested for voter fraud.

A second incident involved the office of DPS and the Texas Secretary of State’s Office who aided Paxton in identifying 95,000 registered voters who were not U.S. citizens. The third incident involved a woman from Starr County being arrested for illegally voting as a deceased individual person.

Canyon News reached out to officials in Hidalgo County, but did not hear back before print. Additional details on the case can be found at www.texasattorneygeneral.gov.