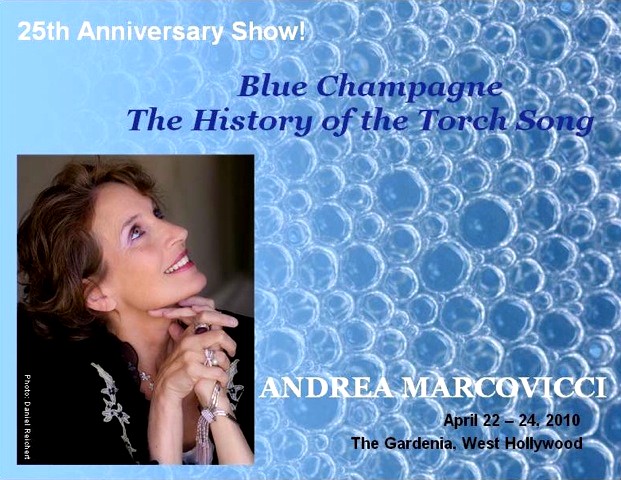 BEVERLY HILLS —With talented cabaret queen Andrea Marcovicci in town, the Gardenia in West Hollywood manages to get her to perform before she leaves for NYC. Tanna Frederick just finished the L.A. Marathon and has added a surfing event to her calendar. Are you exhausted yet? Jim Carey breaks up with his longtime girlfriend, Gerard Butler dates another hot star, Kate Gosselin beats out a legend and there was so much more going on in Hollywood this week, you have to read on to see what it is.

In celebration of her 25th anniversary at the Gardenia in West Hollywood, Andrea returns to her first love — the torch song! Yet, the heartbreak will be balanced by zany numbers in the quest for a little comic relief from unrequited love songs, and of course, wonderful stories of the earliest ladies of torch — Helen Morgan, Ruth Etting, Libby Holman, and Fanny Brice, among others. Highlights will include “Someone to Watch Over Me,” “If Love Were All,” “Love Me or Leave Me,” “Why Was I Born?,” “Body and Soul” and “Shakin’ the Blues Away.”

Don’t miss “Blue Champagne: The History of the Torch Song,” as Andrea brings her unique insight to this tale of longing, losing and gunplay! Andrea tells Canyon News, “Tommy, It’s not too soon to make your reservations for my special torch song show! I’m thrilled to return to the songs that started my career in the place I love the best. My home room, The Gardenia, for the very first try out of the program that will go back East to the Algonquin in the fall.”

Andrea’s show runs from April 22 – 24 and starts at 9 p.m. For fans of great cabaret with the sensational and stunning Andrea Marcovicci, who also stars in Henry Jaglom’s “Irene in Time.” Here’s your chance to see and hear one of Hollywood’s great stars doing what she does best. For reservations at the Gardenia, call 323-467-7444.

The latest news on Sandra Bullock and her husband Jesse James is that Jesse’s still in rehab and she’s keeping his three kids. Though the Hollywood Hills mansion Sandra owns is paparazzi central right now, friends say she’s not in that home. While away from home, Long Beach PD executed two search warrants in the case of vandalism regarding an incident last month between a photographer and the motorcycle mogul. Tiger Woods appeared in public this week for the Masters and he released a Nike commercial with the voice of his late father giving him some inspiration and chastising. This is the beginning of a brilliant PR campaign to rehabilitate Tiger’s image. Just while the roll-out was occurring yet another woman, this one a neighbor’s daughter claims to have had a fling with the golfing great.

Though funnyman and movie star Jim Carey and his one time love of his life Jenny McCarthy seemed to be able to beat the Hollywood relationship curse. Things don’t always work out in Tinseltown. Carey and McCarthy have split after five years, but remain friends. Jim tweeted, “I’m grateful 4 the many blessings we’ve shared and wish her the very best! S’Okay!”

Just what Jennifer Aniston needs. More competition. Handsome “The Bounty Hunter” star Gerard Butler who Jen has dated in the past and is currently traveling around the globe to promote their recent film, is now dating a French TV host. Laurie Cholewa seems very impressed with Butler since they’ve been seen together at least twice after she interviewed him on French television about his new film.

As popular as daytime dramas are, they don’t come close to the real-life drama of former “Jon and Kate Plus 8” mom Kate Gosselin, who could not dance her way out of a wet paper bag, but manages to keep “Dancing With The Stars” ratings soaring, even winning over Fox’s “American Idol.” While appearing on the show her ex-husband Jon filed a lawsuit claiming she’s an absentee mom who will not allow him to see the kids when he wants. ABC seems to be aware of the fact the train wreck styled reality star seems to have a fan following of lovers and haters who can’t get enough of seeing and hearing her on-air. For those who can’t get enough of Kate, she has at least two new series in the works. My friend Buzz Aldrin was voted off this week, but he went out in style and Kate Gosselin, Erin Andrews nor any other contestant on the hit show can ever compete with a man who walked on the moon.

HBO announced this week that Al Pacino will star in a film by Barry Levinson titled, “You Don’t Know Jack,” debuting April 24 on the network. It also stars Susan Sarandon, Danny Huston, Brenda Vaccaro and John Goodman, who is also starring in this Sunday night’s debut of “Treme,” which is also on HBO. While “True Blood” is looking for an actor to play a well-known newscaster in episode three of season three. Any ideas who they can get for the role? I have one suggestion. Yes, me!

Why watch CBS soaps this week? On “The Young and the Restless” cover-ups occur in the aftermath of the murder of Adam Newman, on “The Bold and the Beautiful” Stephanie and Pam remember the times the Logan women took their men and on “As The World Turns,” Dusty is still in grave danger. On Sunday night don’t miss the final season premiere of “The Tudors” as Queen Katherine Howard, who is doomed to failure begins her reign. I enjoyed my close up on Friday’s episode of “As The World Turns” and so loved working with award-winning director and producer Chris Goutman and the beautiful Lesli Kay!

On Saturday morning, actress Dixie Carter who starred in the successful TV series “Designing Women” from 1986 to 1993 died.  Dixie is survived by her husband, actor Hal Holbrook.