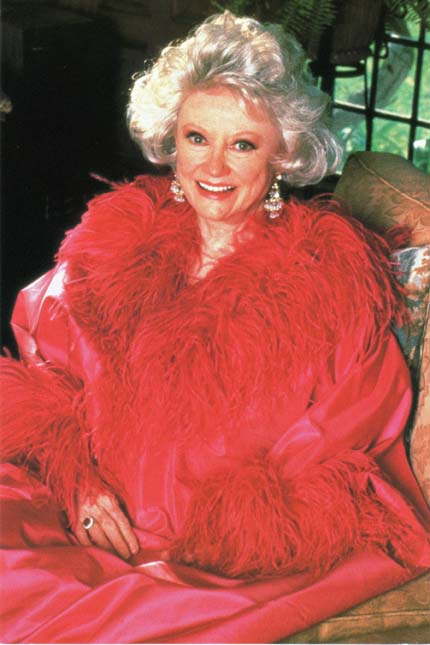 BEVERLY HILLS—Can you believe it? Phyllis Diller is 93. At least that’s what her birth certificate says. You can’t prove it by me or any of her long list of admirers here in Tinseltown. With the release by Radaronline of the new Mel Gibson tapes, his small group of supporters can no longer claim he was set up and didn’t know he was being taped, and there was much more news in the town that never sleeps.

Last Saturday Brentwood’s favorite funny lady and one of its most famous residents celebrated her 93rd birthday in style. Former Los Angeles Mayor Richard Riordan gave Phyllis Diller the key to the city, then proclaimed, “Today is Phyllis Diller day.” Phyllis was also serenaded by the beautiful iconic stars Ruta Lee and Debbie Reynolds, who sang “Happy Birthday” to the forever young actress and comedian. Ruta tells Canyon News, “I would have preferred to sing [borrowed from Britain] ”˜God save our gracious Queen,’ as Phyllis truly is our beloved Queen.”

Beverly Hills socialite and actress Constance Towers, who stars on “General Hospital” as Helena Cassadine said, “We all sang ”˜Happy Birthday’ to her, led by a beautiful, thin, lovely-looking Debbie Reynolds in great voice and former Mayor Richard Riordan. Of course Ruta [Lee] and Webb [Lowe] were there looking fabulous and many more of her friends. Tommy, she’s 93, but she looks and acts like she’s only 39. It was champagne, hors d’oeuvres, and birthday cake.”

The party was at the home of Phyllis’s good friend Bernie Shine. He has one of the largest collections of 1930s Disney memorabilia in the world. Every nook and cranny of this very modern mansion is filled with little Mickey Mouse, Donald Duck and Felix the Cat, figures large and small. It’s like being in a Disney museum. Towers concluded, “Phyllis looked like her actual age backwards.”

Lindsay Lohan’s comfort food in jail is reportedly Twizzlers. Her attorney tells the media, “She’s looking gorgeous and she’s going to come out and surprise you all.” We’ll be waiting with cameras in hand, I’m sure. Perhaps Lindsay will be released this week, as jail sources tell People magazine that inmates are sick of Lindsay, and her star-status behind bars.

Mel Gibson’s silence regarding the almost one dozen leaked-audio tapes is deafening. In the tapes, a man purportedly to be Mel Gibson is heard swearing at a woman said to be his girlfriend Oksana. One of the arguments used by the few people who have come out to defend Mel state that it’s possible he didn’t realize that he was being taped. That argument falls flat after the Wednesday release of voice mail messages by Radaronline. A man is heard on at least eight messages all after midnight stating, “If I can’t sleep, you won’t either.” There is reportedly over 30 calls within a time period between midnight and 3:30 a.m. on February 16, the night Oksana left Mel’s mansion and broke up with him. These calls were not set up by Oksana, but appear to be voice mails due to her refusal to answer the man’s calls. No one can say that a grown man of almost 60 could believe that leaving messages for someone could not be leaked at some point in the future. Robin Sax tells Canyon News, “My sources within official law enforcement say that charges are going to be filed against Mel Gibson in the future regarding the tapes and photographic images of a bruised woman.”

Hot on the heels of Betty White’s Emmy-worthy performance on “The Bold and the Beautiful,” and her groundbreaking appearances on both “SNL” and the newest television sitcom hit “Hot in Cleveland,” word came last week that she is now being considered for a role on ABC’s “Desperate Housewives.” I admit to not being a regular viewer of “Housewives,” but that certainly would change if Miss White joined the cast or even appeared as a guest star. Marc Cherry also discussed stars Vanessa Williams and newly-wed Brian Austin Green as possible visitors to Wisteria Lane.

Not to be upstaged, former First Daughter Chelsea Clinton will be married this weekend in upstate New York. However, the belle of the ball in Hollywood remains Phyllis Diller. Happy 93rd birthday, Phyllis. And many more. If you want a good laugh and learn more about Miss Diller, purchase her recent autobiography “Like a Lampshade in a Whorehouse, My life in Comedy.”

Have a great week, see you next week!

Thanks to Glen Hanson for the photograph of Miss Phyllis Diller