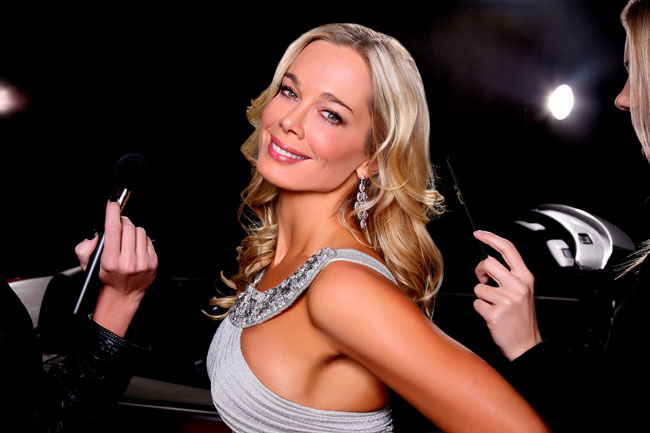 BEVERLY HILLS —This week in Hollywoodland was wet, rainy and soggy. So far no mudslides have hit Malibu or Hollywood Hills but surely it won’t be long. The Golden Globes had everyone drenched, but the stars didn’t seem to mind as it was surely a night to celebrate. Here’s more on the week in Hollywood.

“The Bold and the Beautiful” star Jennifer Gareis, and her fiancee Bobby Ghassemieh, are pleased to announce that they are expecting their first child, a boy, in early summer 2010. “It’s a very special time in our lives,” said Gareis. “Bobby and I would like to thank everyone for all of their support and warm wishes of congratulations.” Also, “B&B” star Alley Mills who portrays Pamela Douglas and her husband, actor Orson Bean (“Desperate Housewives”), will be starring in Noel Cowards’s comedy, “A Song at Twilight” at The Odyssey Theater in Los Angeles, from Saturday, January 16 through Sunday, March 7. For tickets and additional information, call 310-477-2055 or go to odysseytheatre.com.

I promised readers that I’d keep them apprised of Ronn Moss’s status on “Dancing With The Stars Italy.” On the second evening of competition, January 16, Ronn Moss received third place and was not eliminated. Ronn Moss and Sara di Vaira performed the Paso Doble on the second installment of Dancing with the Stars Italy (“Ballando con le Stelle”), on Saturday, January 16. Ronn also received a standing ovation from the audience and high scores from the technical jury.

My longtime friend and fellow author John O’Dowd who wrote “Kiss Tomorrow Goodbye,” The definitive Barbara Payton biography tells Canyon News, “I am excited about the upcoming publishing by Bear Manor of ‘Barbara Payton: A Life In Pictures,’ which will feature many rare and never before seen photographs of the late film star in her prime. I’ve been a fan of Barbara’s my entire life and I am honored to be able to write about her.” If you haven’t seen Johnny’s first book, do get it. It’s a magnificent tome and he’s one of the best authors of all time. The picture book will be released late 2010. Here’s a YouTube clip commemorating John’s first book.  http://www.youtube.com/watch?v=TCNfOcUEGVE

They say soap operas may be a dying genre, but not if you’ve been keeping an eye on Conan and Leno. The feud which has brought in CBS competitor David Letterman into the fray of the NBC hosts battle with their network and each other has ended with Conan apparently leaving with a big payout of his contract and Leno reportedly going back to the Today Show time-slot. It’s a real shame this situation had to be played out in the public arena but now fans and viewers know exactly what it’s like behind the scenes in TV Land. Grown men bicker and argue for time-slots and do not blame themselves for their shows’ falling ratings. Sounds like politics, doesn’t it?A week after the Golden Globes, everyone is still talking about how sexy Jennifer Aniston looked and she’s the focus of an In Touch Weekly story this week stating that she is doing so to remind Brad what he’s missing. She also was snuggling and smooching with Gerard Butler at the after-parties. Whatever Jen’s reason for being in such great shape, good for her! Jen appeared on CNN with George Clooney and many others for the Haiti fundraising telethon this week as well.

Constance Towers returned from Toronto performing in “Six Dances In Six Weeks” ready to go to work at ABC’s “General Hospital.” The beautiful Beverly Hills socialite rarely slows down, but critics raved about her performance in the play. Towers is not only beautiful and talented but very popular and her much anticipated return to “GH” is all the rave for the show’s viewers.

“Y&R” actress Kate Linder reports that her friend Kevin Sorbo won’t be able to make the February 11, ALS event which Linder will be hosting. However, her costar Thom Bierdz has been added to the guest list. Look for updates on the event again next week. If you are interested in attending e-mail events@emergingmagazine.com for details.

Listen up young starlets in Hollywood. Oscar winner Helen Mirren is utterly disgusted about her one-time drunken tattoo. She can’t believe she made such a foolish decision but also is shocked that tattoos have become so mainstream today with young ladies. Mirren of course is correct in thinking that it could be a huge mistake for someone to get a tattoo which is so permanent. Though the “Queen” star has a lot else to talk about. She’s receiving lots of Oscar buzz as Leo Tolstoy’s wife in “The Last Station.” Tanna Frederick is getting great buzz for “Irene In Time,” Mo’Nique for “Precious” and Sandra Bullock for “The Blind Side.”

Fans of the ABC hit show “Lost” had better get ready for the beginning of the end. The final season debuts on February 2. The almost decade long mystery of the Island and it’s mysterious inhabitants soon comes to an end. The show has built a cult following and made stars of actors like Josh Holloway, Naveen Andrews and teen idol Matthew Fox proves to viewers that he’s much more than just a pretty face. He’s a superb actor and leading man as well.

Stage star James Mitchell who is best known to television viewers as Palmer Cortland on “All My Children” for 30 years has died. He had relocated to Los Angeles with the cast and crew of “AMC” when they left their Manhattan studios to bring the daytime drama to Hollywood for filming. His appearance recently on the 40th anniversary episode was welcomed by his costars and viewers. James Mitchell began his career as a dancer in a number of Broadway musicals including “Paint Your Wagon.” Former “AMC” costar Brian Gaskill said of the death, “I had the great honor to work with him and knew him. Rest in peace my friend. If anyone wants to see him in his great prime, go watch the ballet in “Oklahoma.” James Mitchell was 89.   Actress Jean Simmons also died over the weekend at the age of 80.

See you next week. Stay dry!