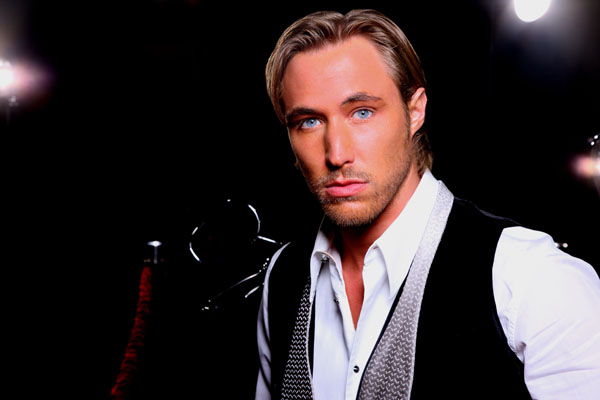 BEVERLY HILLS —This week we pay homage to the men in Hollywood who made a difference in 2009. In 1950, Marlon Brando made his motion picture debut in the film called “The Men,” which also co-starred Oscar-winner Teresa Wright. It was a very moving story about an ex-GI who as a result of a war wound is paralyzed below the waist. The film may have been a bit depressing, but it came after the end of WWII, which had ended just five years earlier and it was a moving depiction of what many soldiers returning home had to deal with. Anything that describes to the uniformed public what soldiers returning home from war have to endure is always a must-see in my humble opinion.

Adding to the list of 2009 Men of the year, “True Blood’s” leading men, Ryan Kwanten, Alexander Skarsgard, Stephen Moyer and Sam Trammell, along with daytime hunk Joshua Morrow who portrays Nicholas Newman on CBS’s “The Young and the Restless,” and you can see why television is still so popular. Joshua, who surprised his beautiful wife Tobe and three young boys with a Brittany Spaniel puppy on Christmas, after telling his family for two months they could not have a dog wants Canyon News’ readers to know what the family decided on for a name for the pooch. “We named her Molly, Tommy. I appreciate you keeping the secret until after Christmas. My family is complete now and the boys love her, so does Tobe,” said handsome Joshua Morrow.

Just as charismatic as Brando are this year’s men in Hollywood from Holmby Hills to Bel Air and Sherman Oaks, our leading men are comprised of producers, filmmakers, actors and directors made our hearts stop and also got our attention in 2009. Starting off with leading man Kyle Lowder, who I predict in five years will become the biggest star in Hollywood. That’s right, Brad Pitt, Will Smith, Tom Cruise and Tom Hanks should make room for Kyle. The handsome star of CBS’s “The Bold and the Beautiful” is perhaps one of the best actors on television currently and this year the smashingly handsome star and his gorgeous, sexy wife Arianne Zucker, who stars as Nicole on NBC’s “Days of Our Lives” added to their household a beautiful baby girl, Isabella in early December. I’m going to lobby the L.A. City Council and the Mayor’s office to give the Lowder’s one of L.A.’s uninhabited hills, then have the parcel of land renamed Lowder Mountain and let them raise as many children as they can afford. Like “Walton’s Mountain,” the hill can be home to a brood of Lowders just like Mr. and Mrs. Walton did decades earlier on the hit ’60s and ’70s TV series. Whether my suggestions are taken seriously or not, Kyle Lowder is the stand-out performer for leading men in Television in 2009. Immensely talented, unparalleled in handsome leading man good-looks, Lowder’s a name everyone will know in 2010.

Brad Pitt continued to make a difference in New Orleans while continuing his rebuilding efforts and lobbying Congress to give the city the money promised to reinforce the levies. Michael Jackson takes a special spot for the stars who made the most money post-death. Jackson’s estate has taken in close to $200 million since his death last June.

Stars like Jack Wagner, “B&B’s” Nick Marone, “ATWT’s” Grayson McCouch, who portrays Dusty, Eric Braeden, “Y&R’s” Victor, Peter Bergman, “Y&R’s” Jack, film star Matt Damon and “Y&R” gentleman Thom Bierdz did things not only professionally but personally to help others. While Wagner continued his battle for cancer research issues, Bierdz became the most positive face for gay Americans when the openly gay actor returned to “Y&R” under the guidance of supreme-producer Maria Arena Bell, and they both brought the once-dead Phillip Chancellor, III back to Genoa City as a gay character. Bierdz continues to fight for equal rights for gay Americans across the U.S. and the star tells Canyon News, “I am happy with my life right now. I just hope that in some small way I make a difference in others’ lives.” Thom Bierdz acclaimed autobiography “Forgiving Troy” won awards in 2009 and he continues to paint for many of the stars and famous faces in Hollywood. Last week we honored Maria Arena Bell, but lets just say, she made a difference in the lives of many of our Men of 2009 and the lives of millions of viewers of television world-wide.

You cannot pay homage to the best of 2009 in Men without mentioning the much deserved Emmy-winner Bradley P. Bell, who is the son of the late great William J. Bell and the most respected icon in daytime TV, Lee Philip Bell, who also lives in Beverly Hills. The Holmby Hills icon who helms his family’s legendary drama, “The Bold and The Beautiful” not only took home the Emmy for best drama in 2009, but the executive producer and genius head writer has created what Guinness calls “The Most Watched Show On The Planet.” The show received the acclaimed award for being the most popular series world-wide in 2009 from my friend, His Serene Highness Prince Albert at his popular annual Monaco awards, which was founded by his mother the former movie star Grace Kelly and the late Princess Grace of Monaco. However, actress Constance Towers was the first to remind me, “Tommy, Bradley and his handsome brother Bill [Bell, Jr.] are princes here in Beverly Hills. I am so proud of seeing how well the two young men and beautiful Lauralee [Bell] have done with their careers and they all are married to beautiful people and have lovely children, who I know their mother Lee loves and enjoys.”

Hollywood may have been engulfed with Michael Jackson’s death, Tiger Woods’s cheating and David Letterman’s past indiscretions. Hollywood’s greatest Men in 2009 all had one thing in common. They persevered in doing what they are trained and paid to do. From acting, writing to directing, these men are giants and not only did they excel greatly in 2009, but chances are they will continue to achieve greatness in 2010 and beyond.Also in 2009 filmmakers Clint Eastwood, Stephen Eckelberry, EdK, Ron Vignone and Henry Jaglom also created must see movies. Eastwood’s “Invictus” is Golden Globe nominated and is credited with making Matt Damon the star every actor in Hollywood wants to work with these days. Henry Jaglom completed “Irene in Time,” sure to be an Oscar contender and he also finished “Queen of the Lot,” which will be released in the spring of 2010. I was honored to be offered a cameo in this film and thank Mr. Jaglom and found Henry and Ron [Vignone] to be incredible and enlightening to work with. Now add me to the other three filmmakers mentioned and I’ll be one happy actor in this town. EdK’s dynamic film “Confession” which stars “GH” star Maurice Benard is going to put Maurice on every movie maker’s short list in 2010. Vignone’s “Always, But Not Forever” directorial work will make him a well-respected name in American’s homes when the film is released later this year. Stephen Eckelberry’s “Nina” left me with chills. In a good way, the haunting production and the extraordinary writing made this film one of my all-time favorites.  Eckelberry is working on two films currrently.  This is a man every actor should have the opportunity to be directed by and he has a stack of audition tapes! I’m still ready for my close up!