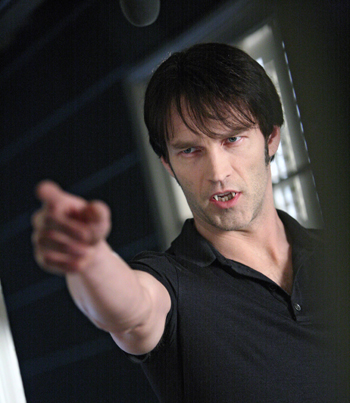 HOLLYWOOD —Starting on Sunday, March 21, Trubies will have an opportunity to see the second season of “True Blood” for the second time. The season will replay each episode until the DVD set of the complete season is released on May 25. Fans have the opportunity to see the beginning of Maryann’s reign of terror on Bon Temp residents and they also get to see the budding relationship between vampire Bill Compton and mind-reader Sookie Stackhouse.

All of the best parts of season two will air on HBO at 8 p.m. each Sunday night and anyone who hasn’t seen the series has an opportunity as well to see what all the hype from fans and critics is all about. “True Blood” is a show that Alan Ball has created. He writes and even directs some episodes with great understanding of some of TV’s most rich and fascinating characters. Critics, many of which have not seen the series will often bash it, calling it anti-Christian and all about vampires and other demonic forces. They lack the understanding that this show is none of that. It’s about a fight of good versus evil, with good most often winning out. It’s also about the acclimation of vampires into society in the deep south of the United States, much like racial minorities had to endure and try to accomplish decades earlier.

The series has some of the most talented actors and actresses in the entertainment industry today. Stephen Moyer who plays Bill Compton is perhaps one of the most charismatic British stars since the late Laurence Olivier. Alexander Skarsgard is obviously gorgeous, but what fans of the show realize as well as Alan Ball, is that this actor is one of the best actors of the 21st century. He wreaks of astounding screen presence and translates power better than most actors who are trained on the stage to convey.

Anna Paquin is an Oscar-winner who portrays the lead role and character Sookie Stackhouse and she perhaps as my friend Steve Macek sums it up best. “She’s not gorgeous, but she is beautiful and just tailor-made for the role of Sookie.” Fans are still raving online about the series. The camaraderie that is shared is sincere and very warm. On a side note, fan Barbara Jean Lay stated on Tuesday night on the official Facebook page, “Good night all. Time to hit the hay. Long day see ya trubies tomorrow, and please Pray For My CHILD That Her SUGERY GOES WELL. [sic]” Fellow Trubies send Barbara their sincere thoughts and prayers for her child’s recovery.