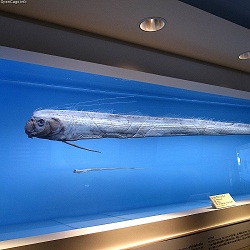 MALIBU—On Sunday, November 28, a 12-foot-long creature washed onto the Malibu shore and was dead when beachgoers attended to it. An 8-year-old boy immediately identified it as an oarfish, having studied the creature in school. Oarfish are usually found at depths between 700 to 3,000 feet below the surface in tropical climates, making its appearance in Malibu rather unusual. The last known time an oarfish landed on a California coastline was in 2006, when a 14-foot specimen surfaced on Catalina Island.

Biologists from the California Wildlife Center later arrived on the scene and took samples before putting it in the care of the Los Angeles County Natural History Museum on Tuesday, December 2. The animal has been frozen and will be further tested, possibly revealing why it made its odd appearance in Malibu. It joins three other oarfish already in the museum’s possession.

Oarfish, frequently the subject of sea mythologies and lore, are relatively mysterious to scientists in terms of their living habits. A live oarfish in its habitat was first filmed in 2001 by U.S. Navy personnel in the Bahamas. They are believed to be able to grow in excess of 30 feet in length.