Video footage captured the vandals on the premises at 2:30 a.m. spray painting the front of the St. Peter’s Cathedral with messages of hate including the swastika. Written in spray paint were the words, “White Supremacy,” “Biden 2020” and “BLM.”

The San Diego Sheriff’s Department was at the scene of St. Peter’s when they learned of a second vandalism incident at Our Mother of Perpetual Help. The graffiti reported to be similar and included a swastika [a Nazi symbol of hate]. 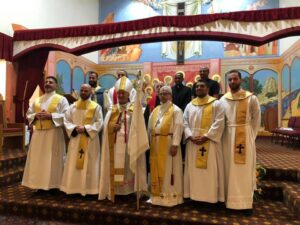 Fr. Andrew Younan, “Fr. Andy,” wrote in his blog about the vandalism at St. Peter’s. Fr. Andy, is one of several priests at the Cathedral and has served at St. Peter’s for the past 12 years, and was away only three days when the incident occurred.

St. Peter’s Pastor, Fr. Daniel Shaba, said, “It makes zero sense. As much as I’ve tried to logically piece it together, it just makes no sense to me.” Father Shaba indicated an outpouring of support from the community.

“Right now, what we are telling the community to do is to pray for more peace in the world, first and foremost,” he said. “But, also the repentance of these people that decided to do this to the church,” said Father Daniel Shaba.

Both incidents are under investigation. Anyone with information is asked to contact the San Diego County Sheriff’s Department at (858) 565-5200.