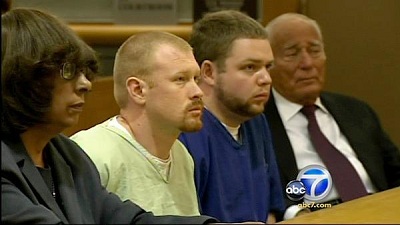 The defendants, 25-year-old Brian Alan Anderson and 26-year-old William Thomas Coppock, each received one year in jail, 500 hours of community service, five years of formal probation and an order to apologize in writing to the people who lost their homes and the firefighters who were injured in the blaze, according to Deputy District Attorney Frances Young. The men also received a sentence of four years in state prison; however, the sentencing has been suspended.

The men were additionally ordered to pay $7.7 million in restitution for firefighting costs. On June 2, they had previously pleaded no contest to one count of causing great bodily injury and recklessly causing a fire to an inhabited structure.

Anderson and Coppock had been among two groups of young people who went to a cave at the top of a hillside in Malibu on November 24, 2007.  The two young men were included in the group that arrived at some point after the first group started a campfire in the cave and left.

Prosecutors at the time had disputed allegations that the fire was an accident because the governor had recently announced a clear emergency message that the area was high-risk and vulnerable to fires. Santa Ana’s torrid and aggressive winds had lashed through the dry hillside region at speeds of 50 mph at the time of the fire, which the defendants and the others with them had failed to report to authorities, according to investigators.  The blaze reportedly destroyed more than 50 homes, injured five firefighters and consumed nearly 5,000 acres.

The defendants are scheduled to return to court on October 2 for a full restitution hearing, according to the Los Angeles District Attorney’s Office.  Two additional defendants, Dean Allen Lavorante and Eric Matthew Ullman, are scheduled for a hearing on October 20 to face charges relating to the incident.  Another defendant, Brian David Franks, entered a no contest plea in 2008 and received a sentencing of five years probation and 300 hours community service.