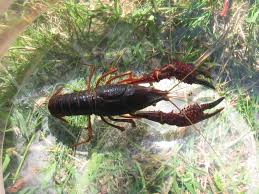 MALIBU — Conservation groups are looking for volunteers to help remove non-native crayfish that are disrupting the ecosystem of Malibu Creek. Procambarus clarkia, also known as the red swamp crayfish, is a freshwater species originally from the southeastern part of the United States.

They are able to successfully disperse themselves by walking across dry land during wet seasons, and can tolerate dry spells for up to four months, but it is rumored that the crayfish arrived in the area when they were brought over by recreational fishers to be used as live bait.

These predators have currently spread throughout Malibu Creek and the upper Trancas Canyon watershed, and continue to increase in number. Because they lay thousands of eggs and can eat almost anything, these invaders have been causing the biodiversity of the Santa Monica Mountains to deteriorate. They eat insects, fish and amphibians that are native to the area and push remaining wildlife to undesirable parts of the habitat by decreasing its water quality.

Other reasons for the crayfish’s success as an invader include rapid growth rates, long life spans (over six years) and high tolerance for salty and low-oxygen water conditions. The California Newt has been especially endangered by the presence of the crayfish.

In 2011, the Mountains Restoration Trust (MRT) received a grant which funded the “Bring Back the Streams” campaign. As a result, approximately 30,000 crayfish were successfully removed from Malibu Creek, but many of them still remain. To deal with the problem, the MRT, Sierra Pacific Fly Fishers and the Santa Monica Bay Restoration are seeking volunteers to remove the crayfish by using mesh nets. The capture events have already begun with volunteers from Americorps and elementary schools all over theLos Angeles area.

After they are corralled out of the water, the crayfish will be measured, kept in collection boxes and frozen, which is the most humane method of extermination. The dead crayfish will then be donated to the CaliforniaWildlife Center which will use them to feed animals such as raccoons and possums. Volunteers will meet every Thursday, Friday and Saturday from 9:30 a.m. to 11 a.m. To sign up, visit http://www.eventbrite.com/e/malibu-creek-aquatic-restoration-registration-6093565017?aff=erelexporg.